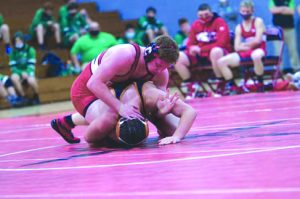 Caldwell’s Marshal Sayre has control of his Shadyside opponent during Wednesday’s season-opening tri-match.

Caldwell High’s wrestling squad hosted its first triangular match of the season on Wednesday, beating the Shadyside Tigers by a 28-27 score and losing to Waterford, 36-14.

Coach Derick Hesson said that his team still need to improve its fundamentals. “The guys showed great effort throughout the matches,” he said. “We as a team need to become more fundamentally sound. We will keep working hard and good things will start to show.”

Caldwell will be in action on Wednesday, December when they travel to Barnesville to take on the Shamrocks and the Bridgeport Bulldogs. They will travel to Fort Frye on Friday for an assembly match in the afternoon and will go to Coshocton on Saturday, December to compete in a quad match that also includes Mogadore and Tusky Valley.