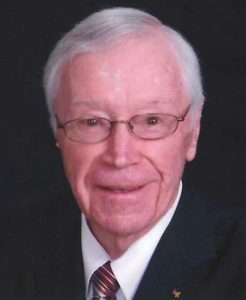 Lawrence Dwight Kuhn, age 97, of Caldwell, Ohio, died Tuesday, December 15, 2020, at Altercare Summit Acres in Caldwell. He was born December 5, 1923, in Burkhart, Monroe County, Ohio, son of the late Lawrence W. and Gertrude Ritterbeck Kuhn. He was a 1942 graduate of Caldwell High School and a United States Army veteran, having served as a tank driver during World War II. He was a member of the 8th Armored Division, 18th Tank Battalion, and he served under General George Patten. He participated in the Battle of the Bulge. Lawrence was employed by Detroit Harvester in Zanesville and Malta Manufacturing in McConnelsville, and he retired in 1987 as a time study engineer for Rockwell International in Newark. He was a member of St. Stephen Catholic Church and the Fr. Klueber Council #2565, Knights of Columbus, both in Caldwell. He loved cars, coin collecting, and antiques. He was a good, devoted family man.

In addition to his parents, he is preceded in death by his wife, Ruth Rose Crock Kuhn, whom he married November 5, 1946, and who died September 20,2013; and one daughter, Connie A. Hardcastle.

A private service will be observed by the family with burial to follow at St. Michael’s Parish Cemetery. A veteran’s service will be conducted by the Noble County Veteran Service Organizations. Memorial contributions may be made to Absolute Hospice Foundation, 39 Summit Court, Caldwell, Ohio, 43724. Friends may share memories, pictures, and messages of support on Lawrence’s memorial page at www.mcvay-perkins.com