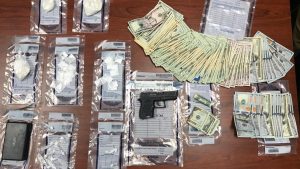 “Drug dealers don’t worry about social distancing, and they didn’t take 2020 off,” Yost said. “Expanded funding through RecoveryOhio was integral to our success, and I’m grateful for our partnership with Gov. DeWine and Homeland Security Investigations – the return on funding is evident in these success stories.”

“I’m incredibly grateful for the work of Ohio’s new drug interdiction task forces and the investigators who are working tirelessly to stop the flow of illegal drugs into our country and state,” Gov. DeWine said. “I have no doubt that their work saves lives. These enforcement efforts are critical to our comprehensive RecoveryOhio plan to prevent the sale, distribution, and use of illegal drugs throughout Ohio, as well as to expand law enforcement’s role in preventing substance abuse through prevention, education and proactive outreach.”

The strength of the task forces – which are funded through the Governor’s RecoveryOhio, in concert with the Ohio Department of Public Safety and the Ohio Criminal Justice Services – is rooted in the collaboration of law enforcement on the federal, state and local levels.

“Over the past several years, Homeland Security Investigations in Ohio has increased its manpower and resources due to the significant levels of dangerous drugs smuggled into the United States destined for Ohio, and the resulting illicit proceeds being smuggled and laundered back out of the country as a result,” said Callender, HSI Special Agent in Charge for Michigan and Ohio.  “The state of Ohio and its law enforcement agencies are outstandingly successful in how they attack these transnational criminal organizations, and it’s our job to bring federal and international resources to the fight.”

Federal agencies primarily provide information and intelligence on matters ranging from border crossings to the history of drug dealers’ traffic patterns. Local agencies help identify areas in need of task force attention, develop confidential sources and supply most of the task force manpower. OOCIC provides equipment for covert operations as well as general and legal support to the task forces.

Under the commission’s jurisdiction, the task forces gain the necessary authority to complete drug interdictions, focusing their efforts on specific methods used by drug-trafficking organizations to smuggle bulk amounts of narcotics into the United States and, ultimately, Ohio – and eventually smuggle the proceeds back to Mexico and other countries.

Here is a breakdown, by task force, of the significant task force seizures in 2020:

One operation netted more than $177,000, 40 pounds of methamphetamine and three handguns from a single traffic stop.

In March, a task force arrest led to the seizure of 6.6 pounds of fentanyl and $30,000. The next month, the task force interdicted $774,830 from an individual traveling between New York City and Chicago who had made suspicious money transfers to Colombia.

In August, four men from New York City were stopped by the Highway Patrol with $64,140 in cash headed toward Cleveland. In a second interdiction the same month, 1,168 Oxycodone pills – to be transported from Akron to Detroit – were seized from a hotel.

In April, the task force completed a case involving individuals who were trafficking marijuana from the greater Cincinnati area. The packages interdicted included 99.27 pounds of marijuana, $315,472, 18 firearms, body armor, 70 1-ounce vape cartridges, 18 grams of hash and 980 packages of THC candy.

An August operation resulted in the arrest of three people who were charged with felony possession and trafficking charges for possessing more than 57 pounds of marijuana, a small amount of cocaine and MDMA, more than $750,000 in cash, one handgun and one shotgun.

In February, the task force announced the indictment in Franklin County of an individual on charges of possessing 2 pounds of fentanyl, ¼ pound of heroin and $14,000.

In one operation alone, the task force confiscated more than 18 pounds of marijuana, a loaded pistol with two extended magazines, and almost $60,000.