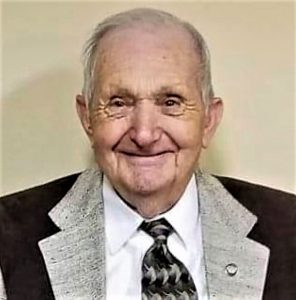 Herbert V. Barker Sr. age 89, of Pleasant City, Ohio passed away Wednesday, December 16, 2020 at the Riverside Methodist Hospital in Columbus, Ohio. He was born June 24, 1931 in Rosedale, West Virginia, a son of the late Warder V. and Georgia White Barker.

Herbert served and protected his nation in the US Army during the Korean War. He retired from the Ford Motor Company in Lorain, Ohio following 30 years of service. He was a member of the Ava United Methodist Church. He was an active Mason for over 40 years. He was a member of the Point Pleasant Lodge #360 F & AM in Pleasant City, Ohio. He was a member of the Guernsey Chapter #211 Order of the Eastern Star, Muskingum Chapter #485 Order of the Eastern Star, and the Order of The Amaranth Inc. Supreme Council, Zane Court #36 Order of Amaranth in Zanesville, Ohio. He will always be remembered for his love of the outdoors, especially working in his garden and mowing his grass. He was most happy when he was able to spend time and play with his grandchildren.

In addition to his parents, he is preceded in death by his first wife Helen L. Rubesne Barker; son Ronnie Barker; daughter-in-law Sue Barker, and eight brothers.

The family will receive friends for visitation Monday, December 21, 2020 from 3:00 to 6:00 p.m. at the Chandler Funeral Home, 609 West Street, Caldwell, OH 43724. A graveside service will be held Tuesday, December 22, 2020 at 1:00 p.m., at the Halley’s Ridge Cemetery, with David Cater and Rev. Thomas Matus co-officiating. Burial will follow with military graveside honors conducted by the Noble County Veteran Service Organizations. The family plans to have Masonic Services at a later date. (Per the Governor’s current Covid-19 guidelines, face coverings are required to attend all services, thank you for your cooperation.)

In lieu of flowers, memorial contributions may be directed to the Grand Court of Ohio Order of the Amaranth Diabetes Fund, c/o JoAnn Woodie Grand Sec., 1096 Marian Ave., Ashland, OH 44805. Please join us in remembering Herbert by visiting his memorial at www.ChandlerFuneralHome.net