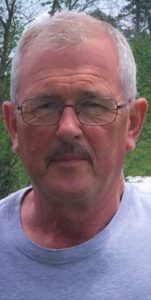 Roger VanFossen, age 66, of Caldwell, Ohio, died Wednesday, December 23, 2020, at Wheeling Hospital surrounded by his loving family. Born December 18, 1954, in Ohio, Roger was the son of the late Myra and Clarence Van Fossen. He graduated from  Shenandoah High School in 1973 and began working for the Dana Corporation until it closed in 2009. Roger retired from Federal Mogul in December, 2019.

In addition to his parents, he is preceded in death by his wife, Vanessa Barnett VanFossen, whom he married in 1981; his daughter, Erica; his sister, Wanda; and his brothers, David and Bert.

Roger was a simple man who lived to make people laugh. He loved watching the Cleveland Browns and the Ohio State Buckeyes, and he loved hunting, fishing, working on his four wheeler with his grandsons, and just being with family. He had formerly attended the Dexter City United Methodist Church and currently attended the Woodsfield and Jerusalem Churches of Christ.

Roger will be remembered for being kind, hardworking, and gentle; but mostly he was a total goofball. He will vibrantly live on every time his family remembers and laughs about  taking his teeth out or playing knee football in the hallway or wiffleball in the garage. His family will forever tell Roger’s stories of Clorox wipes and of his asking “How do I rewind this CD?” Mostly, they will miss his ridiculous field goal kick, which he did all the time just so he could see them laugh and smile.

Friends may call Monday, December 28, 2020, from 4-8 p.m. at McVay-Perkins Funeral Home, 416 East Street, Caldwell. The funeral service will be a private family service with Pastor John Powell officiating; however, friends are invited to view the service Tuesday, December 29 at 1 p.m. on the McVay-Perkins Funeral Home Facebook page where it will be livestreamed. Burial will follow at Dudley Cemetery. An online guestbook may be signed at www.mcvay-perkins.com.