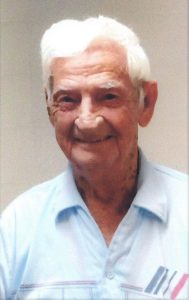 Darrell Lee Chapman, age 95, of Caldwell, Ohio, died Sunday, December 27, 2020, at Altercare Summit Acres. He was born September 3, 1925, in Reed, Kanawha County, West Virginia, son of the late Harvey Joseph and Clara Belle Hannigan Chapman. Darrell was a 1943 graduate of Stonewall Jackson High School in Charleston, West Virginia, and he graduated from Southwestern Baptist Theological Seminary in Fort Worth, Texas. He was a United States Navy veteran, having served for three years. He worked in machine shops and was employed by the former Gould plant in Caldwell. Darrell was a longtime pastor, having served at Barry’s Ridge Baptist Church followed by Grace Baptist Church. He was instrumental in establishing Faith Baptist Church in Belle Valley, where he was a charter member and preached on occasion. He enjoyed hunting working on cars, and carpentry. He was a man of many talents.

In addition to his parents, he is preceded in death by several brothers and sisters; and a son-in-law, Michael Howiler.

A private family service will be observed; however, friends may view the service Thursday, December 31, 2020, at 11 a.m. as it is livestreamed on the McVay-Perkins Funeral Home Facebook page. Pastor Greg Magruder will be officiating. A veteran’s graveside service will follow at Halley’s Ridge Cemetery conducted by the Noble County Veteran Service Organizations. Memorial contributions may be made to the Faith Baptist Church Benevolence Fund, 200 Grove Road, Belle Valley, Ohio, 43717. Friends may leave memories, pictures, and messages of support at Darrell’s memorial page at www.mcvay-perkins.com