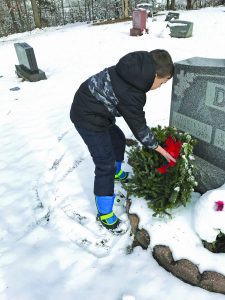 Special to The Journal

Wreaths Across America-Noble County held a Ceremony on December 19 at the Noble County Courthouse honoring all those who made the ultimate sacrifice for our nation.

The ceremony began with a moment of silence to remember the fallen, prisoners of war, those missing in action and to honor those who have served and are serving this great nation. The Honor Guard came forward and stood beside the Veterans Monument. The Invocation was given by Cody Robinson, camp director at Pine Lake Baptist Camp. The Pledge of Allegiance was said followed by the playing of the National Anthem. Local event organizer Faith Nichols explained that on the same day, at more than 2,000 cemeteries across the nation and at places such as the Noble County Courthouse, people gathered together to Remember, Honor and Teach. More than two million wreaths were laid on veterans graves nationwide during the event as people gathered to say “Thank You” to all that have answered the call and served or are serving in the armed forces.

In Noble County, seven ceremonial wreaths were laid in front of the Veterans Monument at the Noble County Courthouse.

Specialist 5th class Jerry Wheeler, who served three-and-a-half years in the U.S. Army, placed a wreath in memory of those who served or are serving in the United States Army.

E5 Machinist  Repairman Ronald Briggs, who served four years in the U.S. Navy, placed a wreath in memory of those who served or are serving in the United States Navy.

Staff Sargent Samuel Cartell, who served four years in the U.S. Air Force, placed a wreath in memory of those who served or are serving in the United States Air Force.

Chief Warrant Officer 4 Robert Carr, who served 30 years  in the U.S. Coast Guard, placed a wreath in memory of those who served or are serving in the United States Coast Guard.

Mary Schockling Pangle, her daughters Kerri and Kelly, and grandchildren, whose father and grandfather Harold Schockling was captured on Anzio Beach, Italy and remained a prisoner of war for 12 months, placed a wreath in honor of more than 93,000 United States servicemen and women from all branches of service whose last known status was either Prisoner of War or Missing in Action. These individuals have never returned to their families or homes. We shall not forget them.

In closing, Nichols said, “We are not here to decorate graves, but to remember not their deaths, but their lives. Each wreath is a gift of appreciation from a grateful America. We need to teach our children to understand the freedoms they enjoy today have not been free but have come with a cost. As a nation we need to stand together, so we can defeat terrorism, hatred and injustice. Thanks to our veterans, we have the freedom to do just that.” 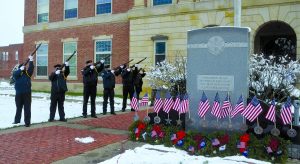 The Honor Guard performs The Salute to our Fallen with a traditional Volley of Three.

The ceremony continued with a group of U.S. soldiers singing along with Lee Greenwood’s, “God Bless the USA,” and a benediction given by Pastor Larry Copley of Faith Baptist Church. It concluded with The Salute to Our Fallen by The Volley of Three, followed by the playing of Taps by Shannon Holt.

Nichols offered thanks to the Belle Valley American Legion for all their help in organizing the ceremony; to Dave Pangle for donating the banner; to Cody Robinson and Pastor Larry Copley for offering the Invocation and Benediction; to Marla Carr for taking pictures and to Shannon Holt for playing Taps, as well as to all those who donated or sponsored wreaths; to Ken Perkins for storing the wreaths in his warehouse; and to all who helped place the 515 wreaths on veterans graves at various cemeteries across Noble County. Next year’s ceremony is planned for December 18, 2021.