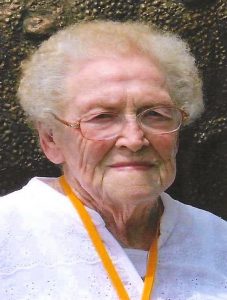 Bernita J. Anderson, age 92, of Caldwell, Ohio, died Wednesday, December 23, 2020, at Altercare Summit Acres. She was born March 1, 1928, in Caldwell, daughter of the late Clarence D. and Geneva May Johnson Lowman. Bernita was a graduate of Caldwell High School and she was a member of the Caldwell Church of Christ. She loved her twice annual trips to the Southern Gospel gathering in Gatlinburg, Tennessee, and she enjoyed going to see Karen Peck and New River in concert. Bernita was a beloved mother and homemaker.

In addition to her parents, she is preceded in death by her husband, Harry D. Anderson, Sr., whom she married June 20, 1946, and who died November 18, 1990; one son, Rick D. Anderson; three sisters, Donna Smith, Garnet Sutherland, and Jean Oliver; and three brothers, Max Lowman, Roy Lowman, and Claude Lowman.

Surviving are her children, Nancy Schultz of Chesapeake, Betsey Geddis of Columbus, Harry D. Anderson, Jr. of Caldwell, and Kerby C. Anderson (Brenda Bowman) of Indiana; one brother, Junior (Tootsie) Lowman of East Canton; many grandchildren; many great-grandchildren; and several nieces and nephews.

A private graveside service was observed at Sharon Cemetery. McVay-Perkins Funeral Home, 416 East Street, Caldwell, is caring for the family.