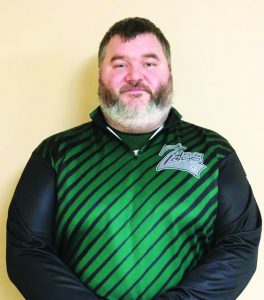 in Six Seasons; Will Remain as Head Wrestling Coach

Jesse Wells has accomplished many things since returning to his alma mater in 2015.

–Participation in football, wrestling and in the weight room have increased greatly.

–Football went from 2-28 in the three years prior to his return to three OHSAA playoff appearances in six years.

–Wrestling went from the brink of elimination to last year’s remarkable season which included a first-ever appearance for an SHS sports program in a state tournament.

With all of that said, however, it became increasingly difficult for Wells to devote enough time to taking each area to the “next level,” and with three young children at home, it was time to put “family first”.

Wells, a 2002 graduate of Shenandoah High School, made an extremely difficult decision and announced today that he will step away as head football coach of the Zeps.

“This decision wasn’t taken lightly and certainly didn’t come easy,” Wells began. “I told Mr. Leffingwell and Mr. Denius I want to continue to see these programs grow and for me to invest more time and energy into any one of those things would either steal from one of the other two or steal from my own family.

“I start every one of our banquets the same way and that’s by thanking my wife and my kids,” he continued, “because I’m investing a ton of time with other people’s kids instead of  my own. At this point, I feel I need to take a step back and refocus my priorities because my kids are now at the age where they notice when I’m not around or I get home after practices and they’re already in bed.”

Wells planned to inform his players of his decision today, and he knows that won’t be easy.

“It’s going to be hard, for sure,” he admitted. “I did this once before (at Meadowbrook) and it’s very tough.”

Deservedly so, Wells is proud of what he’s accomplished in six years, not only coaching both sports, but also the growth in the physical education class which now has a state-of-the-art fitness center as its focal point.

“We’re now in the middle of year six since I came back,” he said. “When we started with football, we had less than 20 guys on the team and we weren’t where we wanted to be and now it’s grown to where we have between 40-45 kids which is the most we’ve had since the early 2000s. We’ve been a playoff team in three of the last four years and we’re at a point now where we want to take that next step.

“With wrestling, the year before I got here we had one kid on the team and now we have a full varsity team, JV kids and we just started a girls’ team,” Wells stated. “We’re coming off three consecutive OVAC titles and a (dual tournament) regional title – the first in school history – and we want to keep that going.

“Weight-lifting wise, my first year here we had 37 kids taking the class and last semester, we were at 168 kids,” he said. “The weight room touches all of our kids – not just the football guys – and we want to continue to grow the weight room and raise the expectations to get better as a school.”
Wells opted to yield the football reins because it’s pretty much a 365-day-a-year venture.

“Football is the most high profile sport and it’s a year-round deal,” he said, “and in order to take that next step, we feel that there needs to be even more workouts. Up to now, the workouts usually involve everybody involved in all sports, but when you have that, it’s hard to structure the workouts to be football-specific.”

The outgoing coach was quick to point out that there’s plenty of talent returning for the 2021 season and thate he’s open to assisting in finding his successor, if asked.

“The cupboard’s certainly not bare,” said Wells. “We have eight guys back on offense that have starting experience including five offensive linemen and seven guys on defense.

“I’ll contribute in any way I can to help the new coach,” he added. “ I truly feel we can find a good candidate to pass the torch to and carry on what we’ve done.”

He also emphasized that he’s not going to disappear.

“The support that I’ve given them (the student-athletes) for the last six years won’t change,” he said. “I just won’t be the guy calling plays on the sidelines or calling time-outs. I’ll be there to help out by preparing them mentally or physically…that won’t be any different.

He’s also not closing the door on coaching football in the future.

“Football has made me who I am today,” he related. “Obviously, your parents have a big role in developing you but my coaches like Dan Wesson, Tim Wilson and Justin Denius here along with Larry Kehres and others at Mount Union were a part of that.”

After a five-year stint at neighboring Meadowbrook High School as head football/wrestling coach from 2010-2014 where he compiled a 20-30 record, he returned to his alma mater as head coach in both sports.

Shenandoah’s wrestling team under Wells’ guidance is coming off its most successful season ever which included reaching the OHSAA State Dual Tournament; capturing the school’s first OHSAA Division III Sectional championship and finishing eighth in the District; and claiming the OVAC Class 1A/2A Tournament and Dual Tournament crowns.

While somewhat blindsided by Wells’ decision, the administration of the Noble Local School District is both supportive and grateful for what he has done and will continue to do for the student-athletes of Zep Nation.

“I’m so appreciative of the opportunity to have gotten to know Coach Wells,” said Superintendent Dan Leffingwell. “He has had a tremendous impact on our football program during his tenure as head football coach.

“When Coach Wells arrived, our roster consisted of 14-15 players,” Leffingwell continued. “During his time here, we have seen our roster grow to nearly 50 players and this does not happen by accident! Jesse Wells loves our school, community and our students, and this shows as our students come out to play in record numbers for Coach Wells, regardless of what it is (weight training, football and wrestling).

“Our football program  is in a much greater position because of Coach Wells!,” said Leffingwell. “His leadership and service has been critical to our program’s growth and success. He will certainly be missed!

“Even though I hate to see Coach Wells step aside as football coach,’he added, “I am certainly happy that he  is staying with us and will continue to work with and support our students and student-athletes in various ways.”

SHS Principal Justin Denius, who has seen Wells grow from a high school student to the present having coached him in both junior high and high school, also praised Wells’ contributions.

“My goal has always been to leave things better than I found them and Jesse has definitely done that here,” he said. “I’m very appreciative of what he’s done and will continue to do.

“A big reason why he’s here is that he cares a lot about this place,” Denius continued, “but I certainly understand that he doesn’t need to be slighting his own family.”

“I wasn’t expecting it at all,” admitted Athletic Director Eric Sholtis. “We had been having conversations about scheduling for next season, so the assumption was that he’d be here, but I understand and support the decision he’s made completely.

“The turnaround we’ve had in wrestling is unprecedented,” he continued, “and football has gone from a 2-28 record under the previous coaching staff to where we are now. Jesse has played a huge part in the turnaround in numbers, in morale and the expectations that our kids have now.”

Sholtis has no doubt that Wells will continue to impact the athletic program at SHS in a variety of ways.

“Probably the thing Jesse does as well as anyone is developing relationships with the kids,” he added, “and he’ll continue to do that for us, so we aren’t losing him.”

As an athlete at Shenandoah, Wells was a standout in both football and wrestling.

In football, he earned second team All-Ohio Division V as a senior defensive lineman; was a two-time first team All-Eastern District, All-OVAC Class 2A and All-Pioneer Valley Conference selection as a key member of the Zeps’ first-ever OHSAA playoff team and he played in the OVAC Rudy Mumley All-Star Football Game.

In wrestling, he was a two-time All-Ohioan, placing fifth in the Division III State Tournament as a junior and fourth as a senior.

He went on to a fine career at the University of Mount Union (then known as Mount Union College), earning his bachelor’s degree in Athletic Training in 2006. A four-year letterman in football who set the career record for tackles by a defensive tackle (206), he was second team all-Ohio Athletic Conference as a junior and first team as a senior; a Preseason NCAA Division III All-American and a second team All-North Region selection in 2005. During his time at The Mount, the Purple Raiders won four OAC championships; were Division III National Champions in 2002 and 2005 and finished as the runner-up in 2003.

Wells also played Arena Football for the Ohio Valley Greyhounds in 2006 and for the Canton Legends in 2007/2008 and his coaching career began as an assistant in football and wrestling at Mount Union (2007-2009).

Wells and his wife, Alaina (also a teacher at SHS), reside in Byesville along with their three children – Kira, Kali and Kane.

Applications for the Shenandoah head football coaching position can be sent to Principal Justin Denius (justin.denius@gozeps.org) until Feb. 1. The availability of a teaching position in the district for the 2021-22 school year has yet to be determined.