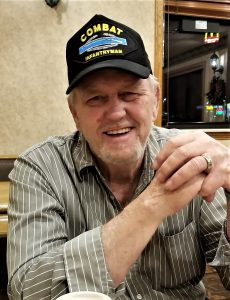 James “Jim” D. Lindsey age 77 of Caldwell, Ohio passed away Sunday, January 10, 2021 at his home under the care of his loving daughter. He was born February 21, 1943 in Falkville, AL a son of the late William Lee and Audie L. Alldredge Lindsey.

Jim served and protected his nation in the U.S. Army during the Vietnam War. He was a member of the Belle Valley American Legion Post #641. He was a heavy equipment operator for many years in the construction industry.

In addition to his parents, he is preceded in death by his wife Patricia A. Lindsey, whom he married October 16, 1961 and who passed away July 15, 2013; three brothers and one sister.

Those left to cherish his memory are two daughters Yolanda Nixon of Belize, Central America and Karla (Terry) Glisson of Walland, TN; several grandchildren and great-grandchildren; two sisters Kathy (Ron) Cardin and Retta Mertz all of Akron, Ohio. He is also survived by several nieces, nephews, and friends.

Cremation will be observed with no additional services held at this time. Chandler Funeral Home & Cremation Service, 609 West Street, Caldwell, OH 43724 has been entrusted to care for the family. Please join us in remembering Jim by visiting his memorial at www.ChandlerFuneralHome.net