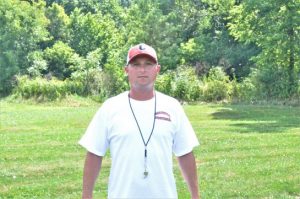 “After 16 years of coaching football at the college, high school and junior high level, it’s time for me to change my focus and priorities.” Gaydos began. “I have spent the last 13 years, with the help of many others, helping to grow the Caldwell football program and I am proud of where it has come.”

Gaydos took over the reins at Caldwell for the 2016 season and led the Redskins to a 20-29 record during his five-year stint in charge of the Redskins, leading them to a 6-3 record and  hosting a home playoff game this past season.

“This was a very difficult decision, but I’m acting on the same priorities that I’ve preached to my players every year.” he continued. “Football is not the most important part of life; family should be the most important and should take priority over anything else. It is time for me to spend more time with my family. It is time to be available to play catch in the back yard when my boys come home from school. I’m excited to be able to do this instead of having to tell them I can’t because I have to go to practice.

“I am not going anywhere though.” Gaydos said. “I hope to help in the process of choosing where the program is headed, and I hope to still be a part of the program at the lower levels. Caldwell football means a lot to many alumni and I want to be someone who sticks around and helps to keep it great.

“It takes so many people to run a successful program.” he continued, “I’m afraid I’ll forget someone, but I still want to try to thank everyone who was involved. I want to thank the players and parents and the coaches at every level within the program. I want to thank my personal mentors – Coach Dean Paul and Coach Dale Widolff – as well as my parents.”

Gaydos has appreciated all the community support he has received.

“I want to thank the fans, community, and alumni for an immense amount of support!,” he said. “Thank you to all of the managers, ballboys, chain gang, grounds crew, administrators, camera crew, equipment guys, statisticians, band members, cheerleaders, coaches of other sports, and most importantly my wife and family for sacrificing and allowing me to do something I love. A successful program takes so much help from so many people and I am grateful for everyone who was even a small part of it.”

Gaydos informed his players of his decision on Sunday,

“To all the players who have been an extension of my family, I cherish the time we spent together,” he said. “I will miss the meetings, dinners, film sessions, workouts, practices and of course the games. I hope someday ‘above the line’ will help you out in the real world! Do not be strangers and if you ever need anything, just ask. All love!”

In looking back over his time at Caldwell, he has many good memories.

“My most memorable moment would be my first win as a head coach in 2016 at Monroe Central or beating Shenandoah that same year,” he offered. “Also, this season as a whole has been very rewarding because of the grind it took over the years with this team and ending on such a positive note at 6-3 and earning a home playoff game. Most rewarding, however, is the time and relationships built with all of these young men who I consider part of my own family.”

Superintendent Kacey Cottrill said he understands and appreciates the reason Gaydos has resigned.

“His reason for leaving is a very good reason…for his family,” Cottrill said, “and we wish him all the luck in the future.

“We are thankful for all the work that Grant has done for us.” he continued. “He built some great relationships with his players. The kids really bought into his philosophy and they did a lot together outside the game of football. He built great friendships within his coaching staff. We will miss this aspect.”

“I just want to say thank you to Coach Gaydos for his years of service to Caldwell Football and Caldwell Athletics,” said Svercek. “Coach Gaydos is a proud Redskin through and through and was able to positively impact many athletes in his five years as head coach.

“This past season, it was especially fun to watch the boys compete and turn the tide,” he continued. “Coach and his staff handled the shortened season and pandemic with grace and put the players in situations where they could be successful.

“Coach is rooted here in Caldwell and from conversations he will still be helping athletes in different capacities and at all levels,” Svercek added. “Again, thank you for the dedication to Redskin athletes over the years and best of luck in the future!”