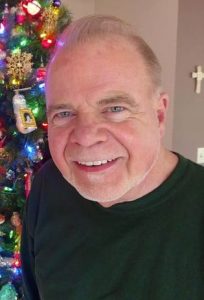 David Mark Robinson, of Mercer Island, Washington, formerly of Caldwell, Ohio, passed away from a heart condition on the morning of January 9, 2021, at his home. He was born June 18, 1947, in Caldwell, son of the late Ben and Sally Robinson. He was the second of four children. David was a 1965 graduate of Caldwell Exempted Village Schools, where he enjoyed activities such as band and his senior class trip to Washington, D.C., of which he had fond memories. After graduation, he worked for McVay Funeral Home in Caldwell, and then eventually moved to Columbus, where he worked for White’s Furniture, Flower City, and Kohl’s. In 1997, David and his partner moved to Los Angeles where he worked for Verizon for 13 years.

David retired in 2009 and moved to the Seattle area, settling in Mercer Island. In retirement, he spent his time going to movies, opera, and the symphony. He loved gardening and taking care of the many wonderful cats in the household. David always looked forward to the Northwest Flower and Garden Show at the Washington Convention Center. It signaled that spring was coming. David also enjoyed his annual trips back to Caldwell, Ohio, to spend time with family and friends. He always looked forward to the trips, even after the amputation of his right foot made travel more difficult.

David loved Christmas and spent months arranging and decorating everything in the house. The result was always beautiful and creative. He had so many Christmas decorations and trees, they took an oversize room to store. He was also the first to remember all important events for his family and friends. David loved plants and flowers and the yard is filled with beautiful perennials.

In addition to his parents, David is preceded in death by his sister, Susan McElroy.

A graveside service will be held January 21, 2021, at 2 p.m. at Greenwood Memorial Park and Funeral Home in Renton, Washington. McVay-Perkins Funeral Home in Caldwell is caring for David’s family in Ohio. Friends may leave memories, pictures, and messages of support at www.mcvay-perkins.com