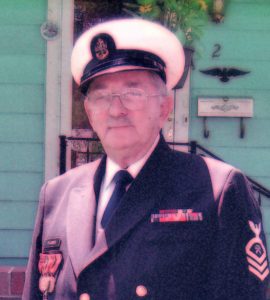 John Henry Feldner, age 93, passed away Wednesday, January 13, 2021 at the OSU Wexner Medical Center in Columbus Ohio, with his daughter-Jeannie Bunn, niece-Dreama Cleveland, and niece-Twila Rodgers at his side. John was born in Noble County on March 27, 1927 a son of the late Henry Belford and Mary Opal (Love) Feldner.

John left home at 17 and joined the US Navy during WWII, after which he finished a 25-year career and retired as a Chief Petty Officer in 1969. He then went to work for Cottrell Engineering Service in Chesapeake, Virginia. He retired from Cottrell as Vice President after 27 years. In 2018, he moved to Thornville, Ohio to spend his final years with his sister, Shirley (Feldner) Butler.

John was a member of Biltmore Baptist Church in Portsmouth VA. He held plural memberships in Western Branch Masonic Lodge #189 (Portsmouth VA) and Doric Masonic Lodge #44 (Chesapeake VA) where he served as Worshipful Master in 1999. He was a member of the Norfolk, VA Scottish Rite Bodies. He also served as blood coordinator of the Masonic District that he belonged to. John enjoyed flying his airplane, going out deep sea fishing in his boat, attending Lodge meetings, and having fun with his wife, Doris.

In addition to his parents, he was preceded in death by the “love of his life” Doris (Watts) Feldner, his wife of 17 years, infant brother Paul, brother- Edward Feldner, sister – Betty Bates, and brother – Charles Feldner.

John is survived by his brother Donnie Feldner of Scio, OH, sister Shirley Butler of Thornville, OH, and brother Gary Feldner of Sarahsville, OH. He is also survived by a daughter, Jeannie Bunn of Michigan and stepchildren; Nancy Legg, Cathy Umstead, Ernie Britt, Wayne Britt, and Carl Britt all of the Portsmouth, VA area, plus numerous grandchildren, great-grandchildren, nieces, and nephews.

Those who wish may direct contributions in John’s memory to Doric Masonic Lodge #44, 2216 Old Greenbrier Road, Chesapeake, VA 23325. Please join us in remembering John by visiting his memorial at www.ChandlerFuneralHome.net