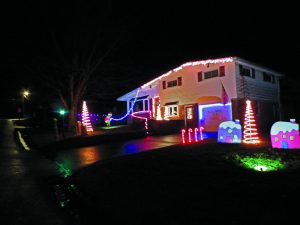 Caldwell Mayor Misty Wells in her first State of the Village address last week commended the members of the Caldwell Village Council, village employees, and the entire community on making her first year in office a success. Addressing council at the online, public January Caldwell Village Council meeting, she spoke of things everyone has worked together to accomplish, such as the realization of her vision of a Hallmark Christmas Village-type setting in downtown Caldwell; improvements at Caldwell Lake and Sunset Pond; the good job the village’s first fulltime village administrator Jeremy Keffer is doing; the work each of the council members has done in his or her areas of focus, excellent work by the village employees, and that in short, said she is very pleased.

She mentioned that she is looking forward to working with newly-elected Sheriff Jason Mackie and his staff, including Deputy Jeffrey Barton, who has been assigned to focus several days a week on patrolling and protecting the village.

Deputy Barton reported that in December the sheriff’s office spent about 78 hours in the village, responding to domestic disputes, property checks, serving subpoenas, assisting in traffic control, conducting a traffic stop and a crash investigation.

Mayor Wells mentioned that all village ordinances are now available for viewing online at the village’s website, and that residents are invited to view them. The sheriff’s office will assist the village authorities in enforcing these ordinances. The village website is www.caldwellohio.org.

Residents are reminded that if they need help from the sheriff’s office or for fire or ambulance calls, to call 911.

In his comments, Village Administrator Jeremy Keffer discussed meeting with the committee later this month to plan the event center at Caldwell Lake so that the village can start getting quotes on the project.

Keffer reported that Hall Engineering will assess the village’s water plant, water supply, and estimate how long the village could supply the needs of its residents and Noble County in the event of a serious drought. They will make a recommendation on whether the village’s plant needs to be entirely replaced or can be refurbished.

There was also discussion about a pipe replacement project that needs to be addressed at the intersection near SR 78 and SR 821. The pipe was laid in 1992, and reportedly sat out in the sun too long and dried out, and is consequently failing now. About 1.75 miles of pipe needs to be replaced. Keffer said he met with a contractor, and will get three estimates on replacing the pipe.

Keffer also said that the village has some cold mix and will be patching potholes in the village.

There were no resolutions to discuss at last week’s meeting.

Three ordinances had their first readings.

2021-01 Appropriations to allow for payment of bills.

2021-03 Historical Ordinance  dealing with rules about signage around the square. Minosky reminded business owners they can do what the like, but if they want the tax credits for building improvements in the historical district, they’ll need to follow guidelines.

In related business, there will be a lunch and learn through OSU Extension at noon on February 4 to inform people how to get those historic district tax credits. Call OSU Extension to register. The event will be held online.

Reporting for the tree committee, Councilwoman Welsh said there had been a question from a resident concerning pine trees marching up the hill into the Sunset Addition, wondering if the village would cut them down as one had fallen and she was worried about her house. No trees will be removed by the village at this time.

In other business, Mayor Wells said she would like to see swings at both Sunset Park and Caldwell Lake, and wants to purchase them locally. Plans for a disc golf course were discussed, and a $10,000 grant was applied for to fund the project, which is planned for the spring of 2022. Closer to spring, the pond at Sunset park will be stocked with fish, and a fishing dock may be added. Mayor Wells commended Keffer and his crew on doing a bang-up job cleaning up Sunset Pond.

There are plans for a sign at the intersections of SR 78 and 821 pointing motorists into the downtown shopping district.

The next meeting of Caldwell Village Council will take place at 6 p.m. on Monday, Feb. 8.