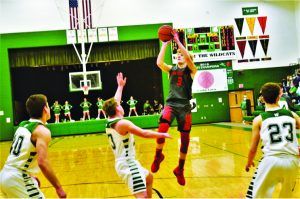 Bede Lori led Redskins scoring with 23 points against the Eagles.

The Caldwell Redskins traveled to Patriot Prep on Monday, returning home with a 50-41 victory over the Eagles.

“This was a big win for us,” Coach Clint Crane stated. “They have some big, athletic kids. I was proud of how our guys did not give up when we got down early. We came out after halftime and shut them down with our defense to take the lead in the third quarter and then put the game away in the fourth.”

Patriot Prep jumped out to an early 13-2 lead before Caldwell reeled off seven straight points to close the gap to 13-9 at the end of the first quarter.

The Redskins outscored the Eagles in the second stanza by one point and the Eagles led, 25-22, going into halftime.

Caldwell came out hot in the third period, holding Patriot Prep to just five points to take the lead at the end of the third quarter, 35-30, and the fourth quarter saw the ‘Skins extend their lead to win by nine.

The Redskins were led by Bede Lori with 23 points while Mat Kowalsky had five rebounds.

On Saturday, Caldwell traveled to Waterford, beating the Wildcats by a 61-55 score.

“I am proud of our guys tonight,” Coach Crane stated. “Waterford is a tough, athletic team and they are tough to beat at their place. We came in tonight ready to play. Any time we have solid contributions from all our players, we are hard to beat. Neither team could get much going in the fourth, but they were forced to foul and we knocked down our free throws to close out the game.”

Caldwell started fast, outscoring Waterford 20-13 at the end of the first quarter.

The Wildcats cut the lead to two, but a bucket by Lucas King put the Redskins up four, 33-29, at the half.

The third stanza was close throughout, with Caldwell leading 48-42 going into the final period.

Both teams struggled offensively in the middle of the fourth quarter, with only one point being scored in over four minutes. Waterford was forced to foul in the last minute of the game and Caldwell made 7-of-8 from the line to clinch the victory.

Holden Dailey led the Wildcats with 21 points and nine rebounds.

The 9-5 Redskins will travel to Fort Frye on Tuesday; host Shenandoah on Friday and Waterford will come to town for a rematch on Saturday.