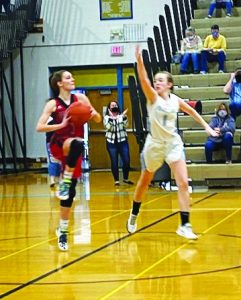 Cayton Secrest moves the ball in the Lady Skin’s victory over Frontier.

The Caldwell Lady Redskins traveled to Frontier on Saturday, returning home with a 63-50 victory which featured a career milestone for senior Cayton Secrest.

“As a team when we have three or four girls in double digits, we are going to give ourselves a chance,” Coach Eli Svercek stated. “Madi Mumaw had a big game knocking down a couple big time ‘threes’ and getting after the boards. Sheridan Archer and Allison Egnot were our anchors in the post tonight cleaning up around the rim and just about everyone made it in the scorebook.”

Secrest made history when she hit a half-court buzzer-beater at the end of the third quarter to score her 1,000th career point.

“This was a great accomplishment for Cayton today, scoring her 1,000th point and she did it with some swag in buzzer-beater style,” Svercek said. “She is a kid who has put so much time in the gym from the time she was a toddler all the way up until now as a young lady.

“It has been an honor to coach her and see her progress as an all-around basketball player these last few years,” he continued, “It’s a coach’s dream to have a kid like Cayton, so I’m really just living in these moments and enjoying every bit of it for her and her teammates.

“She would probably tell you that the best part of the day was the team getting the win too,” Svercek added. “She is that much of a team player.”

Caldwell jumped out to an early lead in the first quarter, led by eight points from Secrest. She hit a three-point shot at the buzzer to give the Lady Redskins a 20-8 lead at the end of the period.

The Lady Cougars stepped up the defense in the second quarter, forcing several turnovers and scoring 14 straight points to take a two-point lead before Mumaw hit a foul shot to end the run. The Lady ‘Skins took the lead with about a minute left in the half on a Sophia Schockling bucket and they led 25-24 going into the locker room.

The third stanza saw Caldwell build to a six-point lead on another “trey” by Secrest. Frontier cut the lead to one on a deep ball by Grace Knowlton. The Lady Redskins went on a 7-3 run to end the period, with Secrest hitting her 1000th point at the buzzer to give Caldwell a four-point lead, 41-37.

Frontier cut the lead to one on a basket by Jaylnn Schmidt, but could not retake the lead as the Lady Redskins outscored the Lady Cougars 11-3 to end the game.

The Lady Cougars were led by Knowlton with 14 points followed by Morgan Haught with 10.

On Wednesday, Caldwell traveled to Monroe Central, with the Seminoles winning by a 53-39 score.

“We just gave way too many wide open looks to Kalista Friday and Haylyn Hiles,” said Coach Svercek. “We also struggled to handle their pressure at times and turned the ball over too much.”

The game was close throughout the first quarter, with the Lady Seminoles leading 9-6 at the end of the period. Monroe Central opened up the game in the second stanza to take a 25-13 edge into the halftime break.

The Seminoles extended their lead in the third quarter, finishing the stanza up by 39-22.

The Lady Redskins did close the gap behind 10 fourth quarter points by Secrest, but the Lady Seminoles held on to win by 14.

Secrest led the Lady ‘Skins with 15 points. The Lady ‘Noles were led by Friday with 24.

The Lady Redskins (5-8) travel to Barnesville on Thursday and host Frontier on Saturday.