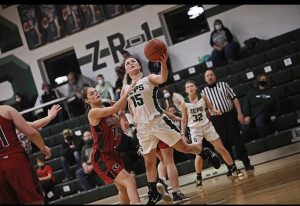 Ashleigh Wheeler going up for a shot.

Shenandoah High earned a season split with Noble County rival Caldwell and saw senior Ashleigh Wheeler reach a career milestone in the process, with the Lady Zeps finishing strong to claim a 69-52 victory over the Lady Redskins on Tuesday.

Caldwell won the first meeting two weeks ago by a 45-42 score, and each team was playing its second game since taking a break due to COVID-19 quarantines. The Zeps led most of the way, but it was still up for grabs until SHS used a 21-10 fourth quarter edge to secure the victory.

The game featured two of the area’s premier guards – Shenandoah’s Ashleigh Wheeler and Caldwell’s Cayton Secrest – and neither disappointed. While Secrest led all scorers with 28 points along with six rebounds, four steals and three assists, the night belonged to her rival and good friend Wheeler, who joined the 1,000-point club for her career.

Wheeler knocked down five three-pointers en route to 23 points, giving her 1,002 (and counting) for her career which included the first two years at Buckeye Trail.

“Ashleigh has been a great asset to this team, not only her scoring and passing, but in her leadership,” said Shenandoah coach Sami Schott. “For her to achieve this goal, there’s no one more deserving.”

“Cayton and Ashleigh both had great games,” offered Caldwell coach Eli Svercek. “Watching those two compete and leave it all out there for their respective teams has been pure joy.”

Caldwell jumped out to a 6-0 lead at the outset, but Shenandoah reeled off 16 in a row including four “triples” by Wheeler en route to a 19-13 advantage at the first quarter break. Secrest also started fast with a 10-point quarter for the Redskins.

Secrest scored eight more in the second period, helping Caldwell to a 17-16 edge which trimmed Shenandoah’s lead to 35-30 at the half. Freshman Brylee May tallied six in the round for the Zeps.

The ‘Skins turned the ball over nine times in the third period, but the Zeps were unable to take full advantage and only outscored the visitors by one, 13-12, to take a six-point lead (48-42) to the final chapter.

Six quick points by Wheeler, including her 1,000th point, opened a 64-45lead for the Zeps who went on to finish strong with a 21-10 fourth quarter to earn the season split.

“We know playing back-to-back games is never easy,” said Shenandoah’s Schott, “especially playing a big team like Barnesville (on Monday) and then your rival. We talked about changing the little things and playing with heart, because the girls knew we were better than we had been playing, and I think tonight showed the type of team we are.

“We know Cayton will get hers, but we did a good job limiting everyone else,” she continued, “and I thought we shot the ball pretty well.

“I also want to credit our bench for their presence and being engaged in the game,” Schott added. “That was our X-factor tonight.”

Providing the top support for Wheeler was May with 19 points and nine rebounds. Freshman Mya Leach contributed nine tallies and six boards while freshman Kadence Noll gave a big spark off the bench with eight points, four rebounds, three steals and three assists.

“I thought Shenandoah was the more aggressive team tonight and they played more physical than us,” said Caldwell’s Svercek. “They wanted it and our girls were timid, and their supporting cast was better than ours tonight.

“We missed far too many layups and free throws to beat anyone tonight,” he continued. “You could tell they were well prepared for our zones and they knocked down shots tonight. Hats off to them…they came off a tough loss and brought the intensity, and we were never able to match it.”

The Lady Zeps dropped a 50-45 decision to Barnesville on Monday, with the Lady ‘Rocks rallying from a seven-point halftime deficit for the win.

Shenandoah led 18-10 after the opening quarter thanks to seven points from Leach, six from May and five from Wheeler, and remained in charge, 26-19, at the intermission.

Barnesville posted a 16-10 edge in the third period behind eight tallies from Halle Markovich to get within one, 36-35, and then outscored the hosts 15-9 in the final frame for the five-point victory.

“It wasn’t pretty,” said SHS coach Sami Schott. “They ran three big girls and we weren’t strong enough, so that was a good play on their part.”

Also key to the outcome was free throw shooting where Barnesville cashed 11-of-17 attempts while Shenandoah was just 3-of-10.

Markovich poured in a game-high 25 points to lead the ‘Rocks, with Ellie Thompson adding nine and Anna Yager scoring eight.

Leach and Wheeler led the Lady Zeps with 15 and 14, respectively, while May contributed eight markers.

On Thursday, the Lady Zeps staged a furious fourth quarter rally only to fall just short, 52-49, against Monroe Central.

Shenandoah started strong, claiming a 15-7 lead after the opening quarter behind nine points from Wickham, but Monroe Central went on a 20-4 tear in the second period to move on top, 27-19, at the intermission.

Each side tacked on 13 points in the third round, leaving the Lady Seminoles on top, 40-32, heading to the final period.

Monroe Central opened the fourth quarter with a 12-4 spurt, pushing its lead to 52-36 with 3:30 remaining before the Lady Zeps mounted a big comeback with the game’s final 13 points before running out of time.

“We put up a great fight at the end after being down by 16,” said Coach Schott. “I’m super proud of the way the girls battled and didn’t give up.”

Kalista Friday led the Lady ‘Noles with 20 points while H. Hiles chipped in 10.

Three players hit double figures for Shenandoah – Leach with 15, Wheeler with 14 and Wickham with 10.

The Zeps (6-8) had 21 rebounds, with Wheeler, Lynch and May each grabbing four, and 19 turnovers. Wheeler also contributed seven assists and six steals; Leach had five steals and Lynch had four assists.

SHS had 16 field goals including four “triples” and was 5-of-11 at the free throw line while Monroe Central canned 15 buckets including five “treys” and made 7-of-9 charity tosses.

The Lady Zeps travel to Beverly to face Fort Frye on Monday and head to Cambridge on Wednesday.