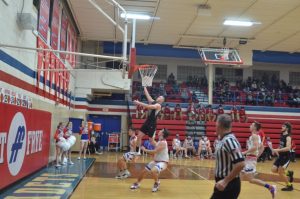 Cade Denius going up for a shot.

State-ranked Fort Frye turned up the heat in the second half and visiting Shenandoah got burned, with the Cadets pulling away in the fourth quarter for a 56-41 repeat victory on Thursday.

Fort Frye led 16-12 after one quarter behind nine points from Kelton Fogle, but Shenandoah turned things around in the second period thanks to 10 points from senior Christian Duniver to move on top, 31-30, at the intermission.

The Cadets increased defensive pressure in the third period, forcing the Zeps into six turnovers and limiting them to just two points while Fogle scored all seven for The Fort which moved on top, 37-33, heading to the final chapter.

“We couldn’t get ourselves slowed down,” said Shenandoah coach Marc Smith after his team managed just 10 second half points. “I can’t fault our effort, but obviously they’re a better basketball team than we are since they beat us twice.

“Sometimes, we think there’s a shot clock up there,” he continued. “When it was 37-35 after we took about a minute and a half off the clock to start the fourth quarter, I was hoping we understood that’s what we needed to do. It may not be the most entertaining thing to watch, but you do what it takes.

“We’ve played a lot of close games and figured out how to win them,” Smith added, “but they did a nice job of speeding us up and we got inpatient and in panic mode.”

Fogle paced Fort Frye (11-1 and ranked No. 8 in the AP Division III state poll) with 22 points while Hart closed with 17. Braden Medley collected eight rebounds for the winners.

Shenandoah (10-2) got 16 points from Duniver, but he was scoreless in the second half. Seniors Max McVicker and Dayton Hill were also in double figures with 12 and 11, respectively. Hill led the Zep rebounders with nine while Duniver had seven. McVicker added five boards and three blocks and senior Cade Denius had four rebounds along with six assists.

“They did a nice job with ‘help’ defense where if he (Duniver) went by one guy, there were other guys there,” said Smith. “We didn’t get ball reversals and move the basketball, and if we had done that we could have gotten him in position to score.”

Although disappointed with the loss, Coach Smith says it’s not the end of the world.

“It doesn’t take away from any of our goals,” he said. “Those are still to win the OVAC and win a district title. We’ve just got to learn from it, and sometimes it takes a loss to get that lesson learned.”

On Tuesday, the Zeps traveled to Gnadenhutten and claimed a 49-45 victory over Indian Valley, giving Shenandoah a 6-0 sweep of games against teams from the Inter-Valley Conference.

Indian Valley led 8-7 after one quarter before Shenandoah used a 17-14 edge in the second period to move on top, 24-22, at the intermission. The Zeps widened the gap to 37-31 after three periods before the Braves gained a 14-12 edge in the final frame to pare the margin to four.

The Zeps displayed excellent scoring balance, with Hill and DeVolld both scoring 12 points; Wentworth tallying nine and Duniver and McVicker both tossing in eight.

McVicker led off the glass with seven rebounds while Hill had five and Duniver had four. Duniver also dished out five assists and recorded three steals.

SHS was 18-of-35 field goal attempts including 7of-13 on three pointers along with a 6-of-6 effort at the foul line. The Zeps had 21 rebounds and 18 turnovers.

The teams split the preliminary games, with Shenandoah taking the freshman contest, 44-37, and Indian Valley winning the JV game, 54-44.

Shenandoah remains on the road this week, with games at Frontier on Tuesday, Caldwell on Friday and Steubenville Catholic on Saturday. JV tip-off is 6 p.m. each night.