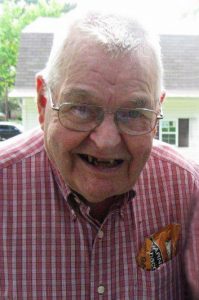 He was a farm hand prior to leaving to serve and protect his nation in the US Army during WWII. Following the war, he returned to his home and began working at what came to be known as Crock Construction where he would construct many homes and buildings for this community for over 55 years.  He was a member of the St. Mary Immaculate Conception Catholic Church in Fulda, OH and the St. Mary’s Ushers Club. He enjoyed playing cards, watching Westerns and farming.

In addition to his parents, he is preceded in death by his wife Gertrude E. Nauer Nau, whom he married August 25, 1951 and who passed away December 17, 2020; a son Donald F. Nau, and a sister Gertrude Hohman.

The family will observe a private Mass of Christian Burial at St. Mary of the Immaculate Conception Catholic Church in Fulda, with Bishop Monforton serving as celebrant. Burial will follow in St. Mary’s Catholic Cemetery. The family is planning a public Mass to celebrate Richard’s life for a later date in the fall. Chandler Funeral Home, 609 West Street, Caldwell, OH 43724 has been entrusted to care for the family.

Memorial donations in lieu of flowers are requested by the family to be given to the St. Mary Church, c/o Doris King, 16805 Park Avenue, Caldwell, OH 43724. Please join us in remembering Richard by visiting his memorial at www.ChandlerFuneralHome.net