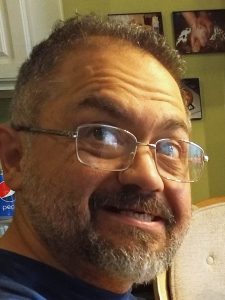 John D. Jackson age 46, of Caldwell, Ohio was granted his angel wings on Wednesday, January 27, 2021. He was born October 28, 1974 at the Naval Station in Rota, Spain a son of Sharon K. Mead Jackson of Caldwell and the late David L. Jackson.

He was a graduate of the Shenandoah High School and the Mid-East Career and Technology Center. He was a member of the Faith Baptist Church in Belle Valley, Ohio and a 37 year member of the Sons of the American Legion Squadron #641 in Belle Valley.  John had several hobbies such as playing cards, playing scrabble, singing karaoke, fishing, and woodworking with his mom. He could often be found watching football and was a die-hard fan of the Steelers, Bengals, Green Bay Packers, and the Ohio State Buckeyes.

In addition to his father, he is preceded in death by his maternal and paternal grandparents and an uncle, Donald M. Mead.

Those left to cherish his memory, in addition to his mother, are a sister, Wendy (Alan) Spiker of Florida; two nieces, Heather Roberts and Clara Roberts; a relief caregiver, Savannah Frank of Cumberland, Ohio and his Fur Baby Companion Shyia. He is also survived by numerous aunts, uncles, cousins, and friends.

Cremation will be observed, with no additional services held at this time. In keeping with his caring nature John gave the gift of life through organ donation. A service to Celebrate John’s Life will be held at a later date with an announcement and invitation for all his friends and family to attend. Chandler Funeral Home & Cremation Service, 609 West Street, Caldwell, OH 43724 has been entrusted to care for the family.