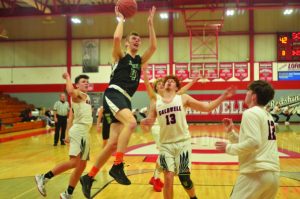 SHS Senior Max McVicker soars to the hoop through a trio of Caldwell defenders; Whyatt Park, Mat Kowalsky (13) and Jett Lori (12). The Zeps completed a season sweep of the rival Redskins with a 63-57 victory.

The Shenandoah Zeps broke out the brooms, completing a season sweep of Noble County rival Caldwell with a 63-57 victory Friday on the Redskins’ court.

Coach Marc Smith’s Zeps, who claimed a 55-52 victory in the earlier meeting, picked up their 12th win of the season, getting the usual effort from the starting five with a couple of key contributions off the bench.

Caldwell managed a 10-8 lead after the opening quarter behind eight points from sophomore Bede Lori, but Shenandoah outscored the hosts 17-11 in the second period to move on top, 25-21, at the half.

Senior Christian Duniver had 10 points in the half for the Zeps, but it was five points from senior Aidan Snyder and four from sophomore Tyce DeVolld that were key, especially with senior Max McVicker on the bench with foul trouble.

“I was happy at halftime even though we hadn’t played very well,” said Coach Smith. “Aidan Snyder, man, he was huge for us. He doesn’t play a lot of minutes, but he did what a senior is supposed to do.”

McVicker returned to the floor in the third quarter and gave the Zeps an energy boost with seve quick points, and then a trio of three pointers – one by Duniver and two by senior Dayton Hill – helped Shenandoah push out to a 10-point lead, 47-37, by the end of round three. Junior Jett Lori kept the ‘Skins afloat with three “triples” in the round.

In the final chapter, Caldwell got eight points from Bede Lori and a pair of “treys” from Whyatt Parks while forcing seven turnovers, but Shenandoah was able to convert 10-of-12 free throws to secure the victory.

“As soon as we hit a couple of shots to start the second half, it forced them to chase us from there,” said Smith. “We were able to finish at the rim and then in the fourth quarter, we got ourselves to the line and knocked them down.

“We’re a senior-laden ballclub and we trust that our kids will step up and make the plays late in ballgames,” he added.

Caldwell coach Clint Crane credited the Zeps for having several players step up and also lamented not forcing a faster pace sooner.

“We went box-and-one on Christian and they had some guys hit ‘threes’ that we didn’t anticipate,” said the Redskins’ box. “ We didn’t take advantage of Max (McVicker) being off the floor and just traded buckets with them in the first half, and then it’s my fault we didn’t press them a little bit sooner because they don’t want to have you speed them up.”

Duniver took game scoring honors with 19 points, with Hill finishing with 12, McVicker with 11 and DeVolld and senior Baylor Wentworth with eight apiece.

The Zeps were 23-of-42 from the field; 5-of-17 on three-pointers and 12-of-15 at the line with 26 rebounds and 11 turnovers. Hill collected eight rebounds and three assists; senior Cade Denius had four boards, four assists and two steals; and McVicker added four rebounds.