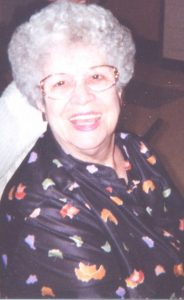 Lillian R. McClintock Touvell, age 93 of Marysville, Ohio formerly of Cambridge passed away on Friday February 12, 2021 at the Ohio State University Hospital in Columbus, Ohio. She was born on January 23, 1928 in Cambridge, Ohio to the late Marion and Mary J. (Maine) (Absolom) Touvell. She is also preceded in death by a daughter June Ann Mealy, two sons Harold and Ronald McClintock, and three sisters and three brothers. She worked at Universal Pottery and retired from the Cambridge State Hospital. She was a formal member of the VFW Auxiliary Post 2901, Eagles, Moose, Golden Sixties, and Senior Citizens. Lillian is survived by a daughter Cheryl (Doug) Barlow of Dexter City, a son Robert (Patricia) McClintock of Marysville, 11 grandchildren, several great and great great grandchildren, and a brother Frank (Carol) Touvell of Lore City, and several nieces and nephews. Calling hours will be from 11:00 a.m. to 1:00 p.m. on Wednesday February 17, 2021 at Bundy-Law Funeral Home with funeral services to follow at 1:00 p.m. at the funeral home with Rev. Carol Touvell officiating. Burial will be in Northwood Cemetery. On-line condolences can be sent to the family at www.bundy-lawfuneralhome.com.