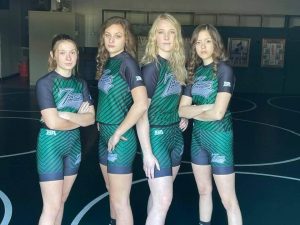 Shenandoah’s four girls turned in a solid performance in the Central/Southeast District Wrestling Tournament, with all four placing individually and the Zeps finishing fifth as a team. Pictured, left to right, are Kyra Kunkle, Grace Wikander, Laney Hitchens and Makenna Clift.

Three other Zeps earn place finishes, team takes fifth in DistrictBy Jeff HarrisonSophomore Laney Hitchens became the first female wrestler from Shenandoah High to qualify for the Ohio High School Wrestling Coaches Association (OHSWCA) State Tournament and the Zeps had their three other girls also place to finish fifth out of 30 teams in the Central/Southeast District at Olentangy Orange High School on Sunday.Hitchens turned in a runner-up finish in the 143-pound weight class to punch her ticket to Sunday’s OHSWCA State Tournament at Hilliard Davidson High School.After receiving a first-round bye, Hitchens pinned No. 1 seed Aida Walters of Olentangy Orange in 50 seconds in the quarterfinals and pinned No. 4 seed Christy Thelusma of Reynoldsburg in 33 seconds in the semifinals.In the championship match, Lily Grayen of Bishop Watterson pinned Hitchens in 3:45.“Laney Hitchens will forever be the first Shenandoah girls state qualifier!,” Coach Jesse Wells said proudly. “I think it’s fitting because she was the one that helped me recruit the other three girls that we currently have.”Grace Wikander finished in fifth place in the 116-pound weight class. After a first-round bye, she was pinned by Hailey Hatfield of Delaware Hayes in 59 seconds; pinned Nevaen Sheppard of Watkins Memorial in 4:37; got pinned by Serenity Perez of Delaware Hayes in 2:33; and pinned Brianna Panzica of Olentangy Orange in 2:25.Makenna Clift was fifth in the 106-pound division. Following a first-round bye, she was pinned by Meagan Justice of Watkins Memorial in 19 seconds; lost an 8-3 decision to Courtney Bichard of John Glenn and then pinned Katy VanDuzen of Bishop Watterson in 4:36.Kyra Kunkle finished sixth at 101 pounds. She also received a first-round bye and then was pinned by Calli Lang of Big Walnut in 1:05; scored a pin of Brittany Rutledge of Delaware Hayes in 2:57; lost an 11-5 decision to Emily Leeseburg of Gahanna Lincoln; and was pinned by Emily Duval of Olentangy Orange in 4:15.By finishing fifth, both Clift and Wikander are alternates for the state tournament and there’s a possibility that one or both of them could join Hitchens competing this weekend.“I’m so happy for our girls,” said Coach Wells. “To start something brand new a couple months ago and progress to this level this fast is amazing!“All of our girls have only been wrestling for a very short time,” he continued. “We have tried very hard to get them matches this year against other girls, but it is very difficult because there aren’t many in our area doing it so in mid-January, we made the trip to Olentangy Orange for a quad to expose ourselves to some of the best girls in the state.“Orange was the state runner-up last year and we knew by seeing them that we would see some of the best girls in the state,” Wells noted. “At the coaches meeting at the quad, all of the coaches were identifying the girls on their individual teams that were state ranked or returning state placers. They asked me if I had any state ranked girls and I laughed and told them we have only been wrestling for like 15 minutes. We weren’t quite to that point yet, but from that experience we would know where we were currently and where we needed to go.“On that trip we only won two matches all day,” he pointed out, “so we got back to work and a month later, when we returned for the district tournament, we were ready! All of my girls wrestled the best they have wrestled all year and we beat multiple girls yesterday that pinned us a month ago.“Everyone won matches yesterday and helped us finish fifth as a team out of 30 with only four girls,” Wells continued. “We are all excited for state next week and we are very happy with where we are, but we know that like everything else, we are going to grow and improve and work very hard to be one of the premier girls wrestling programs in the state.”