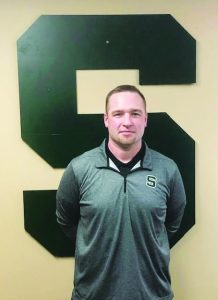 Energy, enthusiasm and the potential to build on recent success.

Those are the reasons John Jones, a product of Cambridge High School and Gannon University, will lead the Shenandoah High football program into the future. Pending approval of the Noble Local Board of Education at Thursday’s meeting, Jones will become the 11th head coach in the history of the school when the Zeps take the field in the fall of 2021.

“On behalf of the administration, staff and Board of Education, we’re excited to have John Jones as our head football coaching leading us into the next era of Zep football,” said NLSD Superintendent Dan Leffingwell. “We certainly believe he has the energy, enthusiasm and ability to take us to the next level and we look forward to continuing the success and growth of our football program.

“Jesse Wells certainly advanced our program during his time as head coach,” he continued, “and we look forward to identifying some new measuring sticks going forward just like with everything in our district.”

Jones succeeds Wells, who stepped down as head football coach of the Zeps after six years with a 33-27 record including three appearances in the OHSAA playoffs. Despite yielding the football reigns, Wells remains as the head wrestling coach and high school physical education/fitness teacher at his alma mater.

“I’d like to thank the administration and staff and the school board members here for taking a chance on me,” said the 33-year old Jones, “and for giving me a shot to show what I can do both on and off the football field.

“I’d also like to thank Coach Wells for not leaving the cupboard bare,” the new Zeps’ gridiron boss continued. “We return a lot of guys on both offense and defense with varsity playing experience. Jesse had them doing a lot of nice things and the kids have been able to learn a lot of different concepts.

“I’m really looking forward to jumping right in and taking advantage of this opportunity,” said Jones, who has already begun the process of putting together his coaching staff. “It’s a great opportunity to meet new kids and learn about their backgrounds and what makes them tick, and see how you can truly have an impact on them.”

Jones was quick to point out it was much more than football that led him to pursue the Shenandoah job.

“It’s the overall direction of the district on the whole” he said. “The staff and the administration and what they see to create a sustainable future and give the students the opportunity to do whatever they want after they leave high school.

“We can coach Xs and Os all day, but I really want to have a positive impact on their lives,” Jones added. “Although we obviously want to win games, that’s truly why we’re here.”

Coaching wasn’t always on the radar for Jones, but his experience at Gannon University changed that.

“Coming out of high school, I went into business at Gannon University and didn’t really have many aspirations to coach,” he said, “but from playing college football and understanding that it’s not about how big you are…not how fast you are…or not how much you can lift, but that it really comes down to learning the game and being a student of the game.

“I had a lot of great mentors in college,” Jones related. “Coach Rzyczyki (Brad Rzyczyki, the defensive coordinator at Gannon during Jones’ playing days who became the head coach from 2012-2019) brought so much energy and took everything to the next level. He was really able to engage kids and that had a trickle-down effect on the team. He’s somebody I want to be like because he brought energy and excitement and got everybody on the same page to believe in a common goal.”

“A lot of thanks go to Coach Josh Lowery for taking a chance and giving me the opportunity to be defensive coordinator without a lot of coaching experience,” he said. “He pretty much gave me the reins and let me go at it.”

Jones describes his coaching style as a good mix.

“I’m not an ‘in your face’ coach,” he said, “but I do like to get involved in the drills and show them how to do it before asking them to do it.

“I also like to stay level-headed,” he continued, “because if you’re rah-rah too much, you lose sight of things. On the sidelines, you have to stay calm, cool and collected to be able to make split-second decisions to put your team in the best position to win.

“With that said, they’ll get a lot more emotion out of me in practice,” he added, “because I just love football and I feel like I’m 18 again when I step onto the field.”

Jones says the opponent will dictate the weekly game plan, but look for a diverse attack.

“We’ll use a pro set,” he said. “We want to establish the running game and branch off of that. We may run it 30 times one game and throw it 30 times the next…whatever gives us the best chance to win.”

After graduating from Cambridge High School in 2006, Jones attended Gannon University where he received his Bachelor of Science in Business Management in 2017. He is scheduled to complete his Master of Business Administration degree from Louisiana State University Shreveport in June of this year.

In football, he was a four-year letterman at fullback and linebacker who was on the Bobcats’ first two OHSAA playoff teams (2004 and ‘05). As a senior, he recorded 95 tackles and was named special mention all-Ohio Division III as well as first team all-Eastern District, all-East Central Ohio League and all-Ohio Valley Athletic Conference Class 4A. He played in the OVAC Rudy Mumley All-Star Game.

Jones was named the CHS “Male Athlete of the Year” for 2005-06 and was a Wendy’s High School Heisman honoree.

He received a Congressional Appointment to attend the United States Military Academies and was offered the opportunity to play fullback for the Army Black Knights, but opted to attend Gannon University, an NCAA Division II school located in Erie, Pa.

At Gannon, Jones started at linebacker for three seasons, serving as a captain of the Golden Knights during his senior year and earning all-Pennsylvania State Athletic Conference (PSAC) honors.

“I’m excited to continue to be able to accelerate the program,” offered Denius. “Johnny is super enthusiastic and he’ll not only be involved with the kids in grades 9-12, but all of our kids in Zep football. We look forward to many good to great years ahead.”

“We’re excited to get Johnny on campus and working with our kids,” echoed Sholtis. “His energy level in our conversations has been through the roof and we’ve seen nothing but positives, so we’re already looking forward to next fall.”