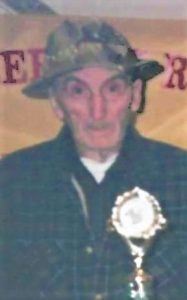 Charles Clyde “Charlie” Burnside, age 95, of Caldwell, Ohio, died Monday, February 15, 2021, at Altercare Summit Acres in Caldwell. He was born April 19, 1925, in Dry Creek, West Virginia, son of the late John Smith and Gertrude Ball Burnside He was a United States Army veteran, having served during World War II in the European Theater. He retired from the American Can Company in Cleveland following 36 years of service. Charlie was a member of the Belle Valley American Legion Post #641. He made custom leashes and collars for dogs, which he sold around the area, especially at trader’s days. He also sold dog supplies and food from his home. He enjoyed water racing with his dog.

In addition to his parents, he is preceded in death by one son, Charlie Brown Burnside; and several sisters.

Surviving are his wife, Donna Jean King Burnside, whom he married in 1969; his children, John Burnside of Las Vegas, Nevada, and Rhonda Burnside of Caldwell; a step-son, Terry Kay of Sarahsville; one sister, Eileen Brown of West Virginia; many grandchildren; many great-grandchildren; and several nieces and nephews.

Friends may call Friday, February 19, 2021, from 11 a.m. – 1 p.m. at McVay-Perkins Funeral Home, 416 East Street, Caldwell, where the funeral service will follow visitation at 1 p.m. with Pastor Larry Copley officiating. Guests are required to wear masks and practice social distancing as required by the state of Ohio. Burial will take place at Ohio Western Reserve National Cemetery in Rittman at a later time. Memorial contributions may be made to McVay-Perkins Funeral Home to assist the family with final expenses by visiting Charlie’s memorial page at www.mcvay-perkins.com, where an online guestbook may also be signed.