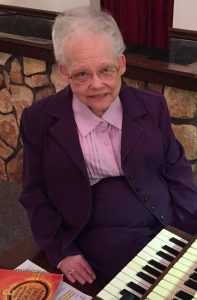 Marilyn Lee Sterling Blaney, age 78, of Sarahsville, Ohio, died Friday, February 19, 2021, at Genesis Hospital in Zanesville. She was born March 29, 1942, in Dilliner, Pennsylvania, daughter of the late Bruce Asa and Phyllis Audrey Hoffman Sterling. She was a 1960 graduate of Point Marion High School in Point Marion, Pennsylvania. Marilyn served as office manager for The State Library of Ohio, Caldwell Branch, from 1965-1973. From 1980-2002, she was employed as library director and clerk treasurer for the Caldwell Public Library. From 1978 to the present time she served as a Caldwell Public Library Trustee. From 1968-2016, Marilyn served as the office manager for Clear Water Corporation. She was a member of the First Church of Christ in Caldwell, where she was the church organist, she was a member of the Worthwhile Sunday School Class. She played the organ in churches for 56 years. She loved music and working number puzzles, and she enjoyed watching Perry Mason and Matlock programs on TV. She was a devoted woman of faith.

In addition to her parents, she is preceded in death by a great-grandson, Delaine Abbott, IV.

A graveside service will be observed Tuesday, February 23, 2021, at 11a.m. at Village View Cemetery in Sarahsville with Pastor Brent DeWees officiating. Memorial contributions may be made to First Church of Christ, 601 North Street, Caldwell, Ohio, 43724, or to St. Jude Children’s Research Hospital at www.stjude.org or 501 St. Jude Place, Memphis, Tennessee, 38105. An online guestbook may be signed at www.mcvay-perkins.com