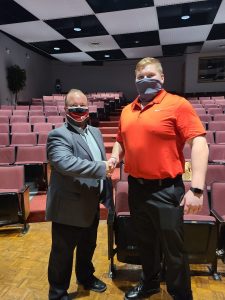 Superintendent Kacey Cottrill (left) congratulates Chance Rucker after he was named the head football coach of the Caldwell Redskins. Rucker is a 2016 graduate of CHS. Photo by Julie LaFollette

These were the first words from Chance Rucker after he was hired as the new head football coach for Caldwell High School at Monday night’s school board meeting.

Rucker is excited for the opportunity to return to his alma mater and give back to the program that gave him so much as a student athlete.

“Being from Caldwell is something that I am very proud of,” said Rucker, “and I am looking forward to giving back to the community and school that has given me so much.”

Although he does not have extensive coaching experience, Rucker plans on utilizing an experienced coaching staff to help him.

“This past season as an assistant was my first experience with coaching,” he stated, “I plan on surrounding myself with people who will be my counsel. I may not know it all, but I will surround myself with a lot of people with the combined knowledge that will help me out along the way to make this program even better.”

Coach Rucker hopes to help build not just a better football program, but to improve all of Caldwell athletics.

“I have a lot of big things planned,” he related. “Not just for the football team, but for things like the weight room that will get all our athletes together…things that will help to build dynasties all around.”

Rucker is ready to hit the ground running and get the players working for next season as soon as possible.

“My first step will be to get my staff together.” he said. “I hope to get a bigger player turnout from last year and get them in the weight room as soon as possible.

“I am a proud alum,” Rucker concluded. “I am thankful and excited to have this opportunity. Go Redskins!”

Rucker graduated from Caldwell in 2016 where he earned all-state honors in two sports. He was named to the All-Ohio first team for football his junior and senior year. Rucker was also a three-year All-East District, All-OVAC and All-PVC award winner. He was an All-Ohio wrestler his senior year.

Rucker graduated from West Liberty University, where he attended on a football scholarship. He was a four-year starter at left guard, starting 33 games during his career and he was named team captain his senior year.

Rucker takes over from Grant Gaydos, who led the Redskins to a 20-29 record in his five years at the helm.

“We are really excited to hire Chance,” said Caldwell Superintendent Kacey Cottrill. “He is a native of Caldwell and knows our community and athletes. His interview was excellent. He did a great job of presenting his thoughts and ideas and where he wants to take the program. Chance has lots of enthusiasm and the kids are drawn to him. We are excited to have Chance as the Caldwell High School football coach.”

“I am very happy and pleased to have him with us next year,” he said. “We will have youth and energy in the football program that will tie into what we are doing in the building. We will have success on the field and success in the high school.”

“We couldn’t be more excited for this hire of one of our own, Chance Rucker,” said Caldwell Athletic Director Eli Svercek. “Chance has seen and played for this program at its highest peak and has been around Caldwell football and all of its rich tradition for the last 20 years.

“Chance brings energy, enthusiasm and dedication to our program,” Svercek continued, “and the kids and athletes are already excited to get back to work and begin their spring training and workouts and prepare for next fall. Whenever you can get a coach who is as invested in the school and community like Chance is, you know it is a home run hire and I’m sure we will start to see our numbers increase because he is a motivator at his core and someone kids can look up to.

“We are very excited to see what the future holds for Coach Rucker and Caldwell football!” he added.