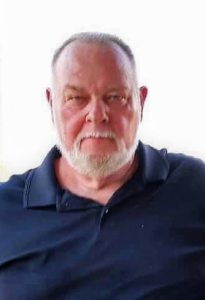 Steven V. Hall, age 70 of Caldwell, Ohio and #1 Zeps fan, left this earth on Monday, March 1, 2021, for his heavenly home where there will be no more pain and suffering. Steve was born April 10, 1950 in Ritchie County, West Virginia, the son of James and Louanna Hall.  He was preceded in death by his son, Jamey, who passed away on June 4, 1992, along with his parents and brother, Floyd.

Those left to cherish his memory are his wife Becky, and his daughter Jodi (Carol), his siblings, Madeta Treadwell, Ann (Frank) Montgomery, Jean Farrah, Pat Hall, and Teresa Uthe.  He leaves numerous nieces, nephews, and thousands from his Zep family.

Steve graduated from Elyria High School in 1968.  He served in Germany in the U.S. Army from 1969 – 1971 and worked as a welder at Central Ohio for many years. Steve owned the Summerfield General Store from 1992 – 2001. He also owned Hall’s Lakeside Restaurant and Cabins from 1999 – 2004. He served on the Noble Local School Board from 1988 -1991. Steve and his wife, Becky, attended Whigville Community Church.  One of his greatest accomplishments was founding Shenandoah Little League in the early 1980s. He was also the founder of Noble County Cruzers in 2011.

Calling hours for friends and family will be on Wednesday, March 3, 2021 from 4 – 8 p.m. at Chandler Funeral Home, 609 West Street, Caldwell, Ohio 43724. Private services for the family will be on Thursday, March 4, 2021 at 12 p.m. Those wishing to watch the funeral service live please visit the Chandler Funeral Home Facebook Page at www.facebook.com/ChandlerFuneralHome starting at 12 p.m. on Thursday. Burial will follow at the Calais Cemetery after one last ride through Shenandoah High School parking lot and through Summerfield.

In lieu of flowers, the family is asking that donations be made to the Shenandoah Athletic Department, SHS 49346 Seneca Lake Rd, Sarahsville, OH 43779 or Caldwell Athletic Booster, 41758 Marietta Rd, Caldwell, OH 43724 in memory of Steve Hall. (Per the Governor’s current Covid-19 guidelines, face coverings are required to attend all services, thank you for your cooperation.)

Please join us in remembering Steve by visiting his memorial at www.ChandlerFuneralHome.net