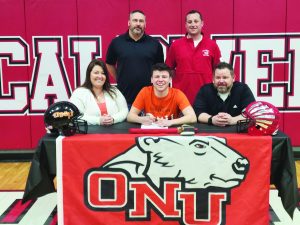 Photo by Julie LaFollette:  Caldwell High senior Whyatt Parks, flanked by his parents Stacy and Brian Parks, announced he will continue his academic and athletic careers at Ohio Northern University and be a member of the Polar Bears’ football team in the fall. Also on hand were Caldwell coaches Jason Rucker and Grant Gaydos.

Caldwell High senior Whyatt Parks will play at the next level, having signed to play football for the Ohio Northern University Polar Bears in the fall. He is expecting to play wide receiver, mainly in the slot.
Choosing Ohio Northern was an easy decision for Parks.
“It was my only visit,” he stated. “I had a couple of other schools interested, but Northern immediately felt like home and I did not want to go anywhere else. I really felt at home with the coaching staff and the environment, so I just felt it was the right place for me.
“I am looking forward to this opportunity to play football in the fall,” Parks added.
Parks has been a three-sport athlete at Caldwell, playing basketball and baseball as well as football.
Former Caldwell Head Coach Grant Gaydos is happy with Parks’ choice of schools.
“I am super excited to see him play college football, and the cherry on top is that he is going to my alma mater,” said Gaydos. “Whyatt is a kid that has shown tremendous growth over the last four years because of his work ethic and dedication to getting better. He is a good kid and good things happen to kids like him.”
Parks is starting at Ohio Northern majoring in Civil Engineering, but he would like to switch to Mechanical Engineering after his freshman year.
Whyatt is the son of Brian and Stacy Parks.