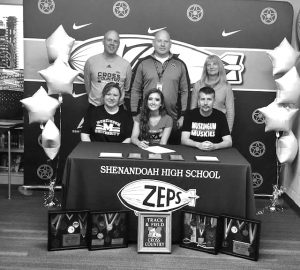 Shenandoah High senior Kendall Mackie, flanked by her parents Jennifer and Jason Mackie, announced she will attend Muskingum University where she will be a member of the Fighting Muskies’ cross country and track teams. Also on hand were three of Mackie’s high school coaches – Craig Sebring, Dave Milliken and Colleen Kasper.

Kendall Mackie started running in the middle of her freshman year and much like the Energizer Bunny, she just keeps going and going.

The Shenandoah High senior, about to embark on her final track season after working her way back from a late-season injury – an avulsion fracture in the foot sustained in cross country – will continue her academic and athletic careers at Muskingum University in the fall.

As a freshman at SHS, Mackie played both volleyball and basketball and decided to give track a shot in the spring. She quickly became enamored with distance running and the rest, as they say, is history.

“I started out a little later than everybody else,” said Mackie, “but the coaches just threw me in there and helped me get where I wanted to be.”

“Breaking the two school records is definitely a favorite memory so far,” she admitted, “but I hope to improve both of those times this year. I’m fully recovered and ready to go.”

“Muskingum’s running program stood out, but it was more than that,” said Mackie. “The coaches and the current members of the team made it feel like a real family environment.”

In track, in addition to the two school records, Mackie’s sophomore season resulted in a runner-up finish in the OVAC (Class 3A) in the 3200 and a fifth place finish in the 1600 and she was fifth in the OHSAA Division III District in the 3200.

The coronavirus pandemic, of course, resulted in Mackie missing out on her junior track season.

Mackie left a lasting impression on several of the coaches during her career as a Zep.

“She’s definitely one of the best we’ve had,” said Craig Sebring, “and she’s a very hard worker. She did a lot of stuff on her own to make herself into a better runner.

“The only downfall was that she got injured towards the end of the season,” he related. “She’ll be a great addition to Muskingum, and I’m especially happy as an alum from there. We’re all hoping for the best for her.”

She started running track as a freshman.” recalled Colleen Kasper. “You could tell it was a good fit for her and could see early on she was going to be a good runner.

“Muskingum is getting a great scholar-athlete,” she added. “She’s just a great person to have in their program.”

“Her mother and sister were excellent softball players who went to Muskingum,” related Dave Milliken, “so she came from a softball family, but they came to me and said she wanted to give track a try and it definitely paid off.

“Kendall’s work ethic is second to none,” he continued. “She set multiple school records for us and is a hard worker and a great kid.

“We’re very excited to watch her at the next level,” Milliken added.

Kendall, who is the daughter of Jennifer and Jason Mackie of Sarahsville, plans to major in business at Muskingum. She will graduate from SHS with an associate’s degree as well as real estate license, both obtained postsecondary from Zane State College.