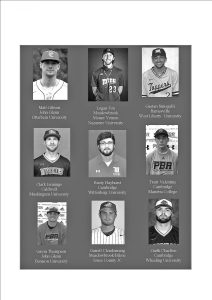 Rumor has it that American Legion baseball is a dying breed.

Don’t tell that to the nine products of Cambridge Post 84 who are currently playing college baseball or the countless others who preceded them, and don’t try to convince long-time manager Ron Antill or coach Jim Antill of that.

“We’re trying to keep it going,” said Ron Antill, who will embark on his 32nd year as manager of Post 84 this summer with a whopping 782 wins to his credit. “I told Don Coss (the manager before Antill who later spent many years as the team’s business manager and is the namesake for the field at Cambridge City Park where Post 84, the Cambridge Bobcats and the Guernsey Valley Babe Ruth teams play) I’d keep it going as long as I could.”

“It’s awesome to have that many talented kids (playing in college),” said Jim Antill, a former Post 84 player currently coaching alongside his dad.

Post 84 players on college baseball teams this year are:

Both Antills say they do as much as possible to help their players get noticed by the next level.

“We always want to help them target schools to continue their academic and baseball careers,” said Jim Antill. “College coaches are busy with their own teams during the high school season, and through Legion ball we’re able to showcase them by playing in several area tournaments each year which gives the college coaches a chance to see them in person.

“We’ll ask the local high school players during spring season if they are looking to play at the next level,” said Jim Antill. “We’re willing to help them if they prove themselves on the field and in the classroom.

It also gives players in between their first two years of college a chance to get in more work during the summer, but Ron Antill says it’s pretty simple why they play Legion ball.

“Most of them come back just because they love playing baseball,” he related.

Legion baseball also allows local players to become friends with players that are usually in the other dugout.

“The whole area gets behind us rather than just fans from one school because we draw our players regularly from six schools,” said Jim Antill.

Both Ron and Jim will try to get to some of the college games to see their kids play, both locally and in Ron’s case, even down south.

“Judy (Ron’s wife) and I spend winters in Florida and usually we are able to see the local kids play, but that didn’t happen this year because of COVID. We’re definitely looking forward to that again next winter.”

Post 84 players who play in college are also afforded the opportunity to receive yearly Don Coss Scholarships established after the passing of the local Legion legend.