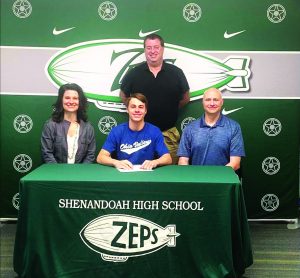 Shenandoah’s Christian Duniver, flanked by his parents Melissa and Dan Duniver, signed his letter-of-intent to attend Ohio Valley University, where he will be a member of the Fighting Scots’ basketball team. Also pictured is Zeps’ head coach Marc Smith.

Shenandoah High’s Christian Duniver – who was named first team All-Ohio Division IV one week ago – will be playing his college hoops close to home.

“I’ve been putting in a lot of work since about fifth grade and focusing on basketball, so it’s great to reap the benefits of that work,” said Duniver.

Duniver, a 6-foot guard, also averaged 5.2 rebounds, 3.0 assists and 2.3 steals per game while shooting 47 percent from the field, 42 percent on three-pointers and 76 percent at the free throw line.

While there have been plenty of memories at SHS, Duniver enjoyed his final season, winning consecutive sectional titles and a career-best performance against the “team to the south”.

“It’s been a fun ride, especially this year,” he said. “We really came together and had each other’s backs and had a pretty good season.”

“That was a good one,” he smiled, referring to the 41-point game against Caldwell during his junior year, “and winning back-to-back sectional titles and sharing that with my teammates was pretty special.”

Duniver will, of course, continue to work on elevating his game for the next level.

“I think I can help with ball-handling (at OVU),” he said, “but individually, I always need to work on my shot and court awareness,…just improve my all-around game.”

Shenandoah coach Marc Smith offered several glowing remarks about Duniver earlier in the week when he was named an all-stater.

“Christian and his family made a decision a long time ago that he wanted to be the best basketball player that has played at Shenandoah,” said Smith earlier. “From grade school on, they have remained committed to that goal. He worked on his game daily, played AAU basketball for many years and traveled throughout the U.S. to play the best competition.

“He put himself in uncomfortable situations in order to improve,” the Zeps’ coach continued. “That is what it takes if you want to be outstanding. He did his work when few were around to see it and he did it for 10-plus years, so it’s no surprise that he became the player he did.

“With all of that said, he never lost sight of the fact that team success supersedes individual accolades,” added Smith. “That’s a tricky balance in today’s society and he walked that tightrope in first class fashion. I hope he serves as a role model for our younger kids in what it takes to be successful, not only in basketball, but wherever ones talents lie.”

An Academic All-Ohio selection and a member of the National Honor Society, Christian is the son of Dan and Melissa Duniver.He plans to major in biochemistry at OVU.