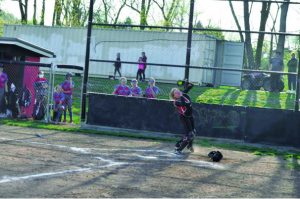 With two outs in the eighth inning, Jaden Haught hit a towering fly ball which was misplayed by the Cadet left fielder, allowing Haught to get to second base and Regan Wheeldin fouled off numerous pitches in her at bat to stay alive long enough to get a base on balls. Sophia Schockling then worked the count full before hitting a walk-off single to score Haught from second base.

“That’s the definition of battling right there,” said Coach Doug Pfeffer. “We got a lead, gave it up, then came right back and tied it up. I am very proud of the girls tonight. Reagan Wheeler hit the ball well today. Madi Mumaw pitched a lot of innings, finishing the first game then going all eight in this game. It was a good team win.”

Wheeler led the offensive attack for the Lady ‘Skins, going 4-for-5 with two home runs and two singles. Josie Lori had three singles; Schockling had two singles and Mumaw hit a home run.

Mumaw pitched a complete game, giving up six runs on eight hits. She struck out 11 and did not give up any walks.

Caldwell started the day by finishing the rain delayed game from last week, with the Cadets winning by a 5-4 score.

The game was tied 4-4 after the fourth inning on Thursday, April 8 when the rain forced the game to be postponed. Fort Frye scored a run in the sixth inning to secure the victory.

Mumaw took the loss in the circle, giving up one run on one hit while striking out three and walking one in two and two thirds innings of work. Wheeler started the game and gave up four runs on three hits. She struck out six, walked three and hit one batter.

Mumaw had a home run and a single while Katie Franklin and McKenzie Hupp each had a double and single.

Caldwell hosted Linsly on Monday, earning a 6-1 victory over the Cadets.

Mumaw got the win in the circle for the Lady Redskins, giving up one run on four hits, striking out seven and walking four.

Wheeler hit a two-run double in the bottom of the second to put the Lady ‘Skins up 3-0. She also had a single.

The Lady Redskins traveled to River on Tuesday, with the Pilots gaining a 7-4 win.

Wheeler took the loss in the circle, giving up five runs on two hits, striking out one and walking five in her 3.2 innings pitched. Franklin came in the fourth inning to give up two more runs on one hit and gave up two bases on balls.

Mumaw led Caldwell at the plate with a home run and a single. Lori had a double and a single while Wheeldin had two singles.

The Lady ‘Skins hosted Frontier on Thursday, beating the Cougars by a 16-10 count.

Wheeler got the win, pitching the final three innings. She gave up five runs on three hits, while striking out two and walking two. Katie Franklin pitched the first four innings, giving up five runs on six hits. She struck out four and walked five.

Franklin led the team with three singles. Mumaw and Wheeler each had a single and a double, while Jaden Haught hit a home run and a single. Sydney Saling had two singles.

Caldwell finished off the busy week with a doubleheader at Conotton Valley on Saturday, with the Rockets sweeping the Lady Redskins, 6-1 and 9-2.

Mumaw took the loss in the circle in the first game. She gave up six runs on nine hits while striking out four and walking two. Katie Franklin pitched one inning in relief, getting one strikeout and giving up one walk.

Sophia Schockling had a single for the only Redskin hit of the game.

Regan Wheeldin was the losing pitcher in the nightcap. She gave up seven runs on nine hits, while striking out two and giving up two bases on balls. Franklin relieved Wheeldin in the fourth inning. She got two strikeouts and gave up three walks while allowing two runs on three hits.

Jaylin Burris and Franklin each had two singles.

The Lady Redskins (11-6) host Monroe Central on Tuesday; Shenandoah on Wednesday and Waterford on Thursday.