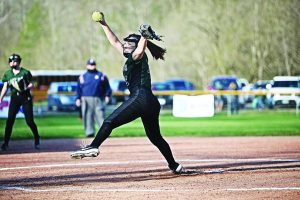 A solid week which resulted in four victories in four games ended well as the Shenandoah Lady Zeps rallied from a 5-1 deficit for a 6-5 home victory against Beallsville on Thursday.

“We had a real good week,” said Coach Easterling. “We had a few errors along the way, but we’re finding a way to win.

“They don’t get down on themselves when they get behind,” she continued. “They stay in the game and keep after it.

“They’re getting more and more confident,” Easterling added. “Every win we get adds to that, too.”

Beallsville jumped out to a 5-1 lead after two and a half innings, with the big hits a two-run single by Harley Nalley and a two-run home run by Sydnee Otto.

The Zeps, who got their first run in the second frame on an RBI single by Laney Hitchens, started their comeback in the fifth with a double by Bailey Frye and RBI singles from Charli Wickham and Hitchens as the key hits.

In the sixth, the Zeps got even on a single by Brittany Farmer who then stole second, moved to third on a wild pitch and scored on an RBI single by Frye.

The game-winner in the seventh came via a leadoff double by Mya Leach and a one-out RBI single by Hitchens.

Wickham and Leach split the pitching, combining for eight strikeouts, six walks and one hit batter.

Leach closed with two doubles, a single and an RBI while Hitchens had three singles and three RBI.

On Monday, the Zeps pounded out 14 hits in an 8-5 victory at Barnesville.

Leach and Savannah Irvin each had a home run, single and two RBI, with Leach’s round-tripper her fourth of the season.

Other hit leaders for the Lady Zeps were Brittany Farmer with two triples and an RBI and Maria Ramsey with a double, two singles and three RBI.

Leach got the pitching win in relief of starter Heather Merry, with Leach tossing six innings with six Ks and two walks.

“We struggled a little bit at the beginning trying to adjust to the rain,” said Coach Easterling. “Our hitting helped compensate for a few bad plays.”

Tessa Johnston had a home run and two RBI and Shayla Hunter had a triple and two singles for Barnesville. Jasmine Caldwell took the pitching loss with three Ks and two walks.

On Tuesday, the Lady Zeps scored a big 8-4 win at Fort Frye.

Leach again carried the big bat by hitting for the “cycle” with a home run, triple, double and single while driving in two runs. Frye belted a triple and double, good for two RBI; and Merry had two singles and two RBI.

Leach and Wickham combined in the circle, teaming for a five-hitter with six strikeouts, five walks and one hit batter.

“We had a few mistakes, but we were able to pick ourselves up and move on,” said Coach Easterling. “I’m glad we are getting more consistent at the plate and more mature as fielders.”

Mady Harper, who took the pitching loss, led The Fort with a two-run home run.

On Wednesday, visiting Frontier had one big inning while the Lady Zeps had two and that was enough for a 12-7 victory.

The Lady Cougars tallied seven runs in the third frame, but Shenandoah stormed back with five runs in the fourth and six in the sixth for to pull out the win.

For Frontier, G. Rinard and J. Schmidt both had two singles.