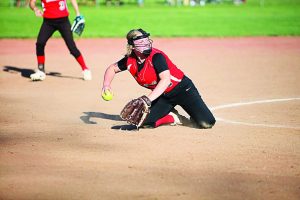 CHS pitcher Regan Wheeler makes a play from her knees during the Lady Redskins’ 6-3 victory over Noble County rival Shenandoah.

The Caldwell High softball team showed no after effects of its OVAC Class 2A semifinal victory less than 24 hours earlier as the Lady Redskins completed a season sweep of Noble County rival Shenandoah with a 6-3 victory on Tuesday.

It was a much closer game than the first go-round when Caldwell scored a 16-1 win on the Lady Zeps’ diamond. 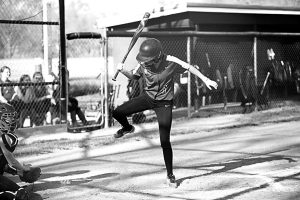 SHS’s Makenna Clift tries to dance out of the way of a pitch during the Lady Zeps’ game in Caldwell.

“I feared coming out flat after last night going clear to Wheeling for a seven o’clock game that we didn’t roll back into Caldwell until 11:12 p.m.,” said Caldwell coach Doug Pfeffer. “The bats were a little flat and we didn’t get a couple of bunts down, but we got it done when we needed to.

“We beat them twice this year, and that’s a big deal for everybody, but in reality it’s just another ballgame,” he said of the rivalry sweep. ” They’ve turned things around with a lot of young girls, but we are young, too, only three seniors so we’ll have some good battles in the next few years.”

Caldwell scored the game’s first run in the bottom of the first when Regan Wheeler singled and advanced to second on a misplay then later scored on a passed ball. 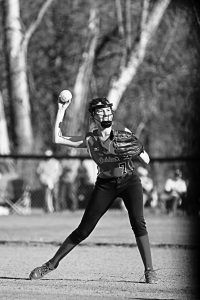 Shenandoah evened the score at 1-1 in the top of the second thanks to a walk to Charli Wickham; a double by Heather Merry and an RBI single by Makenna Clift.

The Lady ‘Skins moved on top 3-1 in the fourth thanks to a two-RBI single by Jaylin Burris, and the Lady Zeps had a chance to keep pace in the top of the fifth when they loaded the bases on an error and two walks before Emily Haga drew a bases-loaded walk to force in a run. Shenandoah was unable to make any more noise, however as a strikeout and groundout ended the threat.

A two-run double by Jaden Haught extended Caldwell’s lead to 5-2 in the bottom of the fifth and singles by Sophia Schockling and Burris and an infield throwing error pushed the lead to 6-3 in the sixth. 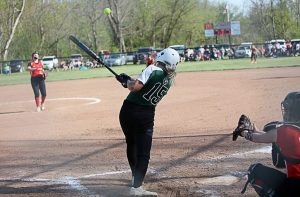 Shenandoah’s Mya Leach belted her fourth home run of the season to lead off the seventh, but the next three batters were retired in order to finish off the Caldwell victory.

“We played much better tonight than we did last night (against Monroe Central) and than when we played them (Caldwell) the first time,” said Shenandoah coach Nellie Easterling :It’s been our M.O. a lot where we get baserunners, but we’re not able to key that key hit to get them in (the Zeps left 10 runners on base).”

Wheeler pitched the first four and one-third innings, with Madi Mumaw taking over at that point. Wheeler had seven strikeouts and two walks while Mumaw fanned three and walked two. 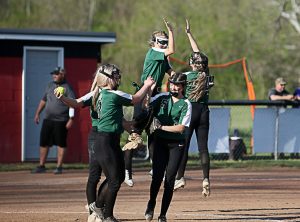 The SHS Lady Zeps’ infield celebrates after making a play during Wednesday’s game against Caldwell.

Leach went the distance for the Zeps, striking out 10, walking three and hitting one batter.

Haught had a double and single and Burris had two singles for the ‘Skins while Leach’s homer and single led the Zeps.