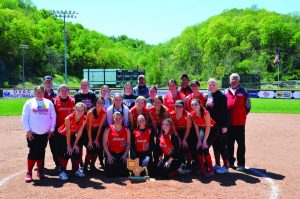 The Champion Team Caldwell Lady Redskins brought home the hardware after winning the OVAC Class 2A Softball Championship with a 10-0, five-inning victory over River at the I-470 complex in Elm Grove, W.Va. Saturday. It was the first OVAC softball title for the Lady Redskins. Photo credit to Julie LaFollette.

“They came ready to play today.” Said Caldwell Coach Doug Pfeffer. “Regan Wheeler ripped a double on the very first pitch of the game and it was just on from there. Even our outs were loud outs.

“We hit the ball hard today and the girls ran the bases smartly,” the CHS coach continued. “We did not have to play much defense, but when we did, we made the plays.”

Coach Pfeffer was glad to see the community come out to support the team. 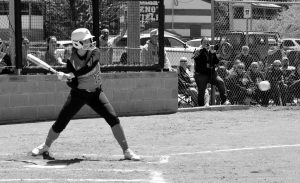 “When we left town, we had three sheriffs deputies escorting up and a wrecker following us,” he noted. “When we hit the square, there were so many people there and we made a couple of laps. It hit the girls that we can really do something here. The people believed we could do it and we came out and played hard.”

The Lady Redskins used a big third inning to put the game out of reach. Josie Lori led off with a single; Jaden Haught was walked and Sydney Saling hit a single to score Lori from second.  Sophia Schockling was then walked to load the bases and Regan Wheeldin hit an RBI single to score Haught before Wheeler drove in Saling and Schockling with a single. Wheeldin and Wheeler scored on a dropped third strike that was dropped again on the throw to first, giving the Lady ‘Skins a 9-0 lead in the middle.

Wheeler – one of three seniors – was excited to win the championship.

“I was really pumped, my adrenalin was running. I was ready for the game,” she said. “I think we all were. We wanted the win and we got it.” 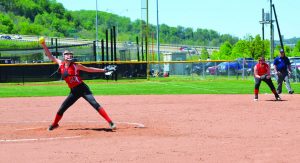 Caldwell’s Madi Mumaw delivers the final pitch of the game as the lady Redskins claimed their first-ever OVAC Softball Championship Saturday. Mumaw struck out the batter.

Madi Mumaw had a stellar day in the circle, pitching a no-hit shutout. She struck out eight batters and walked just one in five innings.

“It was amazing” she said. “I didn’t expect it. We have a great team, and they had my back the entire time.”

Mumaw led the offensive attack with a triple and single; Wheeler had a double and single and Lori had two singles. 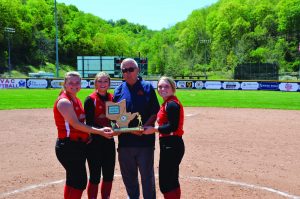 Katie Lively took the loss for the Lady Pilots, giving up 10 runs on nine hits while striking out seven and walking four.

The Lady Redskins advanced to the title game by beating top-seeded Toronto, 7-3, on Monday.

Haught put Caldwell up in the top of the first inning with a three-run home run over the center field fence, scoring Katie Franklin and Mumaw.

The Lady ‘Skins added another run in the sixth when Wheeler hit a single that scored Schockling.

Caldwell scored three insurance runs in the seventh. Mumaw led off the inning with a single, followed by a double by Haught. Schockling then sacrificed in Mumaw. Saling had an RBI single scoring Haught, and a Jaylin Burris RBI double finished the scoring by plating Schockling.

Toronto came back in the bottom of the seventh, but they could only push across three runs and the Lady ‘Skins held on for the victory.

Mumaw had an exceptional night in the circle, giving up just one hit in the seventh inning. She had 15 strikeouts and gave up three bases on balls.

Mumaw also led the offensive attack with a double and three singles. Haught hit a three-run homer and a double while Wheeler and Saling each had two singles.

Riley Kinsey took the loss for Toronto, giving up seven runs on 12 hits. She struck out 11 and walked four.

Brianna Burriss had the lone hit for the Lady Red Knights.

The Lady Redskins (16-6) travel to Wheeling to face Linsly on Monday and host Beallsville on Thursday.