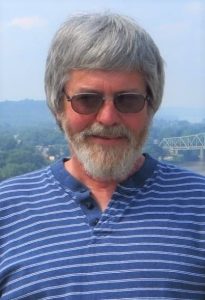 Wally was born in Zanesville, Ohio, on August 23, 1949, the middle child of Dayle and Carol (Archibald) McAuley.  He graduated from Caldwell High School in 1967 and then was drafted into the US Army.  Wally’s commitment to service began when he proudly served his country in Vietnam from 1969-1971.  He returned to Caldwell after he was honorably discharged and was an active member of the Caldwell VFW Post #4721, where he served as Post Commander on multiple occasions.  He was a member of the Fraternal Order of Eagles and the Belle Valley American Legion. Wally also proudly served on the Noble County Veteran’s Service Commission for many years and helped to ensure his fellow veterans were provided with resources and assistance when in need. Wally was a dedicated and committed man. He worked at Fabri-Form in Byesville and New Concord for nearly 40 years before retiring in 2011.

Wally loved sports, especially high school sports, and had a bird’s eye view of the field for Caldwell High School Football games as a member of the ‘chain gang’ for 40+ years.  Wally’s love of high school sports knew no limits and he was a fixture at all sporting events for many years, including attendance at scrimmages and practices in support of the kids. Wally was also a long-suffering fan of the Cleveland Browns and he enjoyed watching the Ohio State Buckeyes on Saturdays.  He loved technology and was an early adopter of computers. He took college classes at Ohio University-Zanesville in the early 1990s in the computer science field.  He also loved music and had an amazing 8 track collection that he reluctantly turned to an amazing and vast record collection.  He was relieved that he bypassed a CD collection so he was not again outdone by online music services that exist today.

Upon retirement in 2011, Wally found his true calling as he began working for the Journal-Leader as the Sports Photographer.  It was during these years that he enjoyed his life to the fullest. Behind the camera was where he was most comfortable and it allowed many members of the community to get to know him.  Wally always had a nice word of encouragement for student athletes and the kids gave him such joy.  Wally was an introvert by nature but came alive and found delight and fulfillment in taking pictures.  He cared about the community of Noble County with all his heart.  His presence at sporting events and activities will be missed as he had been a fixture on the sidelines for many years.

Accolades and awards were not important to Wally, but he was humbled and honored to receive a Distinguished Service Award from The Ohio Association of Track & Cross-Country Coaches in 2016.  Along with his fellow chain-gang members, he was inducted into the Caldwell High School Football Hall of Fame in 2002. He also received many awards from various newspaper associations.  In October of 2019, Wally had the privilege of taking a trip on Honor Flight Columbus, where he was flown to Washington DC for the day with fellow senior veterans to acknowledge their service to our country.

Wally found Caldwell to be a special place that exemplifies the virtues and goodness of small town living.  Wally felt fortunate to live his life surrounded by supportive and caring people.  He will be greatly missed.

Friends may call Monday, May 10, 2021, from 11AM-2PM at McVay-Perkins Funeral Home, 416 East Street, Caldwell, where the funeral service will follow visitation at 2PM with Ken Perkins officiating. Friends may also view the service on the McVay-Perkins Funeral Home Facebook page.  A veteran’s graveside service will follow at Olive Cemetery conducted by the Noble County Veteran Service Organizations. In lieu of flowers, memorial contributions may be made to the Caldwell Athletic Boosters, 41758 Marietta Road, Caldwell, Ohio, 43724. Guests are required to wear face coverings and practice social distancing at all gatherings. An online guestbook may be signed at www.mcvay-perkins.com