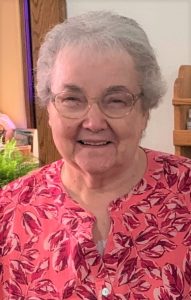 Anne T. Pickenpaugh, age 81, of Belle Valley, Ohio, died Saturday, May 8, 2021, at Genesis Morrison House Hospice in Zanesville. She was born February 15, 1940, in Syracuse, New York, daughter of the late William Drew and Verna Mae DeVolld Totten. Anne was a 1958 graduate of Belle Valley High School, and she attended Franklin Business School in Columbus. She served as secretary to Congressman Robert T. Secrest in Washington, D.C., and she was employed by the Ohio Department of Motor Vehicles. She retired from the State of Ohio Auditor’s Office. In 1996, Anne founded and led the Noble County RIPPLES Cancer Support Group after going into remission from her own cancer journey. She was a member of the Belle Valley United Methodist Church, where she formerly served as president of its United Methodist Women. She enjoyed genealogy research and researching historical events. Anne was a devoted wife, mother, and grandmother.

In addition to her parents, she is preceded in death by her husband, James W. Pickenpaugh, whom she married December 9, 1966, at the United States Capitol Building in Washington, D.C., and who died February 4, 2020.

Friends may call Tuesday, May 11, 2021, from 11 a.m. – 1 p.m. at McVay-Perkins Funeral Home, 416 East Street, Caldwell, where the service will follow visitation at 1 p.m. with Pastor Debbie Gheen officiating. Burial will follow at Sharon Cemetery. Memorial contributions may be made to the Noble County RIPPLES Cancer Support Group, P.O. Box 54, Belle Valley, Ohio, 43717. Guests are required to wear face coverings and practice social distancing at all gatherings. An online guestbook may be signed at www.mcvay-perkins.com.