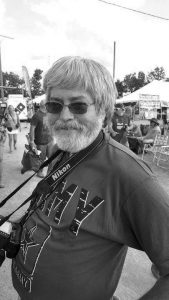 “Everybody knows Wally” was something that has echoed for years around these parts, and because of that, all of Noble County is in mourning.

Charles “Wally” McAuley, who loved everyone and everything Noble County, laid his camera down for the final time Friday afternoon when he passed away at the age of 71 at Marietta Memorial Hospital.

Although he was a man of few words, his presence throughout Noble County was always felt.

If something was going on here, or involved someone from here doing something noteworthy somewhere else, it’s a good bet that “Wally” was there to both document the event through his camera lens while also providing enthusiastic support.

As the photographer of The Journal-Leader for many years, he could be seen inconspicuously taking photos of both the big events and many that might not be as noteworthy but were equally important to those involved.

Anywhere…anytime….Wally was there. It might be it at the Noble County Fairgrounds or the Shenandoah softball field…at an Ohio Valley Athletic Conference event or an OHSAA State Tournament venue….Wally was there. You won’t always see photographers (or reporters) from the big city newspapers on hand, but you’d find Wally right there getting photos of “his kids”.

You see, that was why Wally did what he did. It wasn’t for the money, or the glory, and he’d be the first to admit every photo wasn’t perfect. It was, as he very simply told me more than once, ‘I do it for the kids.’”

Wally also served on the football “chain gang” at his alma mater for some four decades, working with the likes of Allen “Shamu” Tarleton, Jim “Crummy” Crum and “Orf” Davis, and another proud moment came when at foursome was inducted into the Caldwell Football Hall of Fame many years ago.

Before his recent series of medical issues, the only thing that could keep Wally away from a Noble County sporting event was his other passion – the monthly meetings of the Noble County Service Commission. I knew that the first Tuesday of every month was “off limits” to get him to cover a game because he was proud to have served in the U.S. Army during the Korean War and took his role on the Commission very seriously.

While Wally rooted for his beloved Redskins (he was a 1967 Caldwell High graduate) openly and even sometimes a bit too fervently including once at a boys’ basketball game when he disagreed with a call, pounded his fist against the mat on the wall and was promptly tossed by the referee!

He did his best to stay neutral for the many Noble County battles between Caldwell and Shenandoah, but his heart was with the Redskins. But that was OK, even to the folks who wear green.

No doubt we’ll find ourselves thinking “Where’s Wally” at everything that takes place in Noble County in the future, and here a some thoughts of some of those who he encountered:

Anne Chlovechok, Editor of The Journal-Leader – “I had the privilege of working with Wally for 10 years. He was an excellent photographer, and was well-known locally and around the state for his photography of sporting events, dances, school functions, the fair and local festivals and general news stories. He was always happy to go out and get us a photo.

“Wally was an all-around good person, with a keen sense of humor and great taste in music. (Meaning his taste coincided with mine!) We had a few adventures together on the job, like the time we took a safety class and then donned special gear to tour the MarkWest plant in Summerfield. We are all going to miss him. I’m going to miss him, and I wish him Godspeed.”

Ty Moore, Noble County Commissioner – “There was never a time I didn’t sit down with Wally and hear him talk about Noble County sports. He knew everything and recalled every play – when it happened and who made the play. He was my go-to guy if I wanted to know anything that happened in the ‘50s or ‘60s.

“He was a great supporter for both Noble County schools and a big influence as a veteran. He will be missed.”

Eli Svercek, Athletic Director at Caldwell High School – “The impact Wally had on our kids is probably greater than we could ever imagine. Wally was at everything, from chain gang on Friday night football games to cross country races two hours away on Saturday mornings. If the Redskins were competing, Wally wasn’t far behind.
“Wally was a good man, one who cared so much about kids and wanted to showcase their success with his work. I am so grateful for his service to our schools and our community. He will be missed.”

Eric Sholtis, Athletic Director at Shenandoah High School – “Wally was a staple in Noble County Athletics and in our school community. He could be seen on the sidelines of so many athletic events and he was the lens to showcase so many kids. He connected the kids’ successes with the community.

“More than that, he always had a positive comment and a smile. I would like to offer my condolences on behalf of so many students and coaches, past and present. He will be missed.”

Dugan Hill, Track/Cross Country Coach at Caldwell High School – “Wally might be the biggest Redskin fan that has existed in recent memory. He has attended more sporting events during that time than anyone else.
“My first memory was while I was the AD. Wally was on the chain gang for every home football game, and I never once in my 13 years got things ready for them. Wally was always there early and got all the chains and yard marker ready for everyone else. He loved Caldwell football.
“When Wally started taking pictures for the Journal, his true understanding and love for athletes came out. He loved to watch talented athletes put on a show, but he loved even more the hard-working kids that did the extra work to become as good as they could to help a team.
“The conversations we have had over the years about different athletes and teams have been wonderful. Very open and honest.
“I sat my teams down and asked what their memories were. The honest caring that he showed to them was mentioned over and over. He always told each of them ‘good job’ and was not just saying it because he should…he meant it. I truly believe Wally would have driven anywhere to take photos of my kids and as much as we travel, he almost has. Everything from Canton to Rio Grande and Tiffin to Dayton. It meant so much to know that no matter where we ran, Wally would be there so our kids would get their pictures in the Journal.
“There will never be another Wally McAuley that gave so much of his life so that kids could be recognized and, unfortunately, I am afraid kids will suffer in the future because of his absence.”

Tom Rataiczak, OVAC Treasurer – “Wally was more than a photographer or journalist. He was the biggest and best PR person to come out of Noble County. Everyone in the OVAC greeted Wally when he appeared at an event, and if anyone from Noble County was competing, you could go to the bank that Wally was there.

“The smile, the friendly hello, the easy conversationalist. No matter the sport, no matter the conditions, Wally was there to promote the kids. He reminded me so much of (long-time Times Leader photographer) Boyd Nelson in his ability to touch peoples’ lives and hearts not only with his pictures, but also with his genuine spirit. The OVAC family lost a dear friend and supporter.”

Stan Randolph, long-time friend – “I’m always amazed at somebody like him who donated so much of his time to things like the veterans commission and the chain gang, just to name a few. He lived a modest life, and did what he did because they were things he was passionate about.

“He played on the first Caldwell football team that ever played at the fairgrounds and they brought them back for an anniversary and he was proud of that, too.

“We weren’t related, but we had mutual relatives and we’d have holiday dinners together and rider together to games over the years. I will miss him dearly.”

Ed Brickeen, former Journal-Leader Sports Writer – “It’s hard to put into words what Wally did for me. He showed me the ropes at the paper when I was out of my element and showed me how to do my job. Everyone who knew Wally knew his love for Caldwell and knew his love for the athletes. To say he will be missed is an understatement.”

Julie LaFollette, Journal-Leader Sports Writer, former Caldwell AD – “It is hard to imagine Noble County sporting events without Wally there.I think my favorite memory of Wally was when he got kicked out of a basketball game at Monroe Central when I was the Caldwell Athletic Director. He was on the baseline taking pictures when one of our kids did not get a call, I think it should have been a foul. Wally smacked his hands off the mat, he might have also said something to the ref, and that’s when they tossed him.
“I think this shows just how passionate Wally was for our athletes. He stood up for them no matter what and he was not afraid to express his opinion. He was always there for the kids, whether it was a pre-season scrimmage, a summer league game, or a championship. They were all important to him. I know all of us will miss him and the unwavering support he gave all our athletes.
“It has always been a pleasure to work with him, as a coach, as an athletic director, and, most recently, as a co-worker. He will be missed.”

Although his vantage point will be quite different, there’s no doubt Wally will be snapping photos of all things Noble County from above.