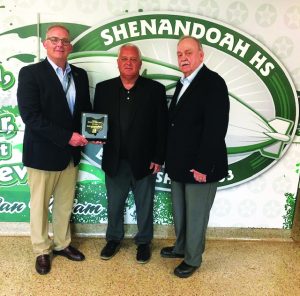 Noble Local Superintendent Dan Leffingwell (left) received an award for his three years on the OHSAA Board of Directors from OHSAA Executive Director Doug Ute (center) at last week’s NLSD Board of Education meeting. Also on hand was long-time, former Shenandoah High School Principal Don Ullman, who like Leffingwell spent many years representing the area on district and state boards.

Pays Visit to Where Career Began

Leffingwell Presented with Award for Time on OHSAA Board of Directors

Back where it all began.
OHSAA Executive Director Doug Ute, who is about to complete his first year as the leader of the state’s athletic governing body, was on hand at last week’s Noble Local Board of Education meeting to present Superintendent Dan Leffingwell with an award recognizing his three years on the OHSAA Board of Directors.

Ute – who is the 11th leader of the OHSAA in its 113-year history – began his teaching/coaching career at Shenandoah as a business teacher while serving as head baseball coach, assistant football and basketball coach and assistant athletic director.

“I’m so appreciative of Mr. Ullman,” he began, referring to former SHS Principal Don Ullman. “You never forget that first person that gave you a chance.

How did Ute – who graduated from Bellville Clearfork – even hear about little Shenandoah?

“I was at a basketball camp in Grove City, Pennsylvania and someone brought it to my attention that they knew a place where they were looking for an assistant coach and had a business (teaching) opening,” he recalled, “so I came here and talked to him (Ullman).

“I grew up in Richland County which is also a rural area like this one, so it just felt right from the moment I got off the interstate,” Ute continued.

His fondest memories of his time here?

“My recollection of not just this school, but this entire area, is there are so many nice people who are very welcoming – guys like Jeff Carpenter and Steve Hall were among them,” he said. “I loved the staff and kids here and the community as a whole.”

So why did he leave?

“I wanted to be a head basketball coach and I just couldn’t wait Dan Schwieterman out,” he laughed, “so leaving turned out to be a good move in that regard because he was head coach here another 20-plus years!

“I truly value my time here with Dan and Mark Withrow (the Zeps’ head football coach at the time,” Ute added.

Upon his arrival via the backroads between St. Clairsville and Barnesville last week, Ute was quickly reminded of what this area has to offer – including one not-so-good memory.

“This campus is so beautiful and presentable,” Ute added, “and they’ve expanded their athletic facilities greatly since I was here.”

Ute was appreciative of Leffingwell’s contributions to both the OHSAA and East District, and he also thanked the NLSD Board of Education for “sharing” him with both groups.

“I’ve known Dan for a while,” said Ute, “and he is regarded as one of the top superintendents in the state by many, including myself. He’s all about providing opportunities for all kids, both athletically and academically. He represents not only this district, but this entire area, at the state level.

“He’s been on the Eastern District Board for years and the last three years, he’s served as the president of our state board and he’s provided so much leadership,” he added.

“I want to say ‘thanks’ to the Noble Local Board of Education for his time and share our appreciation to the entire community. Between Don Ullman and Dan Leffingwell, you have over 30 years of representation on district athletic boards and that’s neat for a district like Shenandoah to have that type of representation.”
Ullman was on the East District Board from 1989-2003 and on the OHSAA Board of Directors from 1994-96 while Leffingwell first served on the Southeast District Board from 2005-2013 and has been on the East District Board since 2013 while serving his three years (2019-2021) on the OHSAA State Board.

Leffingwell, of course, was appreciative of being recognized for his tenure and for the chance to serve in both capacities.

“It has been an honor and privilege to serve on District Athletic Boards (SE and E) for over 15 years representing our district on a State level,” he said. “The past three years on the State Board of Directors (one year as President) was both challenging and rewarding!

“As Noble Local Schools Superintendent, I am honored to represent Zep Nation following in Don Ullman’s footsteps and his 14 plus years of service to the OHSAA as well,” Leffingwell added.

He also praised Ute for his leadership in the OHSAA both during the trying past year and going forward.

“I’m ecstatic that we were able to hire a person of Doug Ute’s quality  into the OHSAA Executive Director position,” said Leffingwell. “He is a tremendous leader who values ALL, and works tirelessly for our member schools and student- athletes. The OHSAA is in great hands under his leadership!”

“When you look at what things were like in August and where we’re at now,” he said, referring to the fact that the OHSAA will crown its final champions of the 2020-21 school year in the next few weeks despite dealing with the ongoing coronavirus (COVID-19) pandemic. “I’m very pleased with what we in the state of Ohio have accomplished this year because our kids got an opportunity to participate in athletics.

“Every Wednesday, I’m on a Zoom meeting with Executive Directors in another section that includes Maryland and (Washington) D.C. and they haven’t played anything,” he related. “A lot of others have stalled or taken a pause, and here in Ohio – under the situation – I don’t think we could have asked for better than what we accomplished.”

Fans returning to sporting events this spring bodes well for next year, according to Ute.

“Early signs that something good is coming for next year,” he said. “Spring sports picked up (in attendance) being outside even to the point it’s better than pre-COVID times in many cases.

“The big thing is that when the gates open for football and other sports in the fall,” Ute continued, “our communities have to get back out there to support the kids because they deserve it.

His biggest regrets of the past year-plus?

“If there’s something I feel bad for, it’s that our seniors didn’t get to play those rivalry games (like Shenandoah-Caldwell) in front of packed houses,” he said. “Another disappointment was that a lot of the kids in our urban settings in particular didn’t get a chance to participate in sports…the kids in the “big eight” cities didn’t get to have the same experiences in many cases that our rural kids did.”

What does Ute hope for in the future?

“The existing sports we have we want to grow,” he offered. “The trend across the country is that in football, for example, the numbers are dropping, so we want to turn that around.
“We also want to expand in areas like cheerleading, girls’ wrestling, boys’ volleyball and esports,” Ute added.