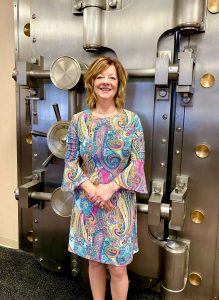 Submitted by Ashley Rich, The Farmers and Merchants Bank

Cynthia F. Yunk, Executive Vice President and Chief Financial Officer of The Farmers and Merchants Bank will retire June 4 following 47 years of service. She is a 1974 graduate of Caldwell High School and the daughter of Hazel and the late James W. Fogle. Cindy is the eldest of six siblings; Donny (Stoggie) passed in 2013, Gary (Harold) passed in 1987, Dennis (Whitey), Bob (Rolly) passed in 2015, and Annette (Netty).

The Monday after Cindy graduated high school she started as a teller at the bank, and has been working her way to the top ever since. Cindy’s work ethic and constant drive allowed her to break the glass ceiling time and time again. She has held many positions during her time at the Bank including bookkeeper, teller supervisor, new accounts representative, assistant cashier, cashier and asst. vice president. After seeing Cindy’s constant determination, former President Robert Parks promoted her to chief financial officer in 2007. Her promotions didn’t stop there. She earned the title of vice president which she held until her final promotion to executive vice president in 2020.

Cindy holds the title of the longest tenure of any Farmers and Merchants Bank employee with her incredible 47 years of service. Throughout her years at the bank, she attended multiple banking courses and was a graduate of the Ohio School of Banking, the OBA Compliance School and the Bank Leadership Institute. She also served on various Ohio Banker League committees throughout the years. Even as Cindy quickly moved up the corporate ladder, she continued working to better herself and gain more banking knowledge. After three years, in 1994 she earned her diploma from the Graduate School of Banking in Madison, Wisconsin.

Cindy’s passion extended outside of the bank’s walls and into the community. She served on the Noble County tourism committee; was a volunteer and committee member for the Genesis ProAm; a member of the NWTF Handicap Hunt committee for nine years; and a vacation bible school helper. Cindy is a member of St. Stephen’s Catholic Church and a member of the East Central Ohio Women’s Golf Association. She has also been a staple on The Farmers and Merchants Bank Fundraising Committee since 2005.

Retiring was not an easy decision for Cindy being that the bank has been such a huge part of her life. She will miss seeing her co-workers and customers, helping with projects and participating in community events. During retirement Cindy plans to spend time doing the things she loves with the people she loves. She and her husband Jeff are both avid golfers and plan to visit all of the premiere golf courses on their bucket list. Cindy also plans to spend more time with her mom Hazel, working in her flower beds, and trying new recipes while using her many kitchen gadgets.

The bank is hosting a private retirement party June 19 at the Cambridge Country Club to honor Cindy’s lifetime service and excellence.

Words cannot express how grateful and honored we are to have Cindy at our bank for nearly five decades. Although we are sad to see her leave, we are excited for her to enjoy her retirement, and wish her and Jeff all of the best.