Two of the biggest guys in the Shenandoah High Class of 2021 capped off an outstanding sports year in Zep Nation in a big way, posting runner-up finishes in the 113th annual OHSAA State Track and Field Championships at Westerville North High School on a sizzling Saturday. 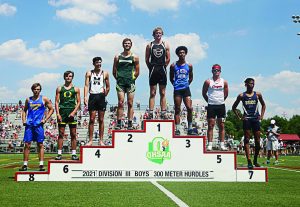 McVicker actually achieved double all-state as he finished eighth in the 110-meter hurdles as well.

The 6-8 Payton got the day off to a great start in the high jump, making his way to the second spot on the podium thanks to a jump of 6 foot, 5 inches. Both Payton and junior Lane Sarver from Tri-Village were successful on their second try at 6-5, and both missed all three attempts at 6-6, but Sarver won out since he had no misses in the earlier jumps from 5-10 through 6-4 while Payton had three.

A man of few words, the smile on the face of “Shak” told the story after he received his medal.

“I’m very happy,” he understated, “but I really felt I could have done better. It was pretty hot, but I was able to keep moving through.” 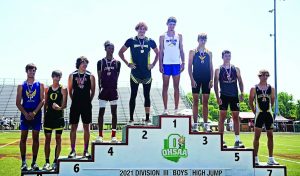 Payton took pride in representing SHS one last time, and he’s already looking forward to heading off to the University of Findlay to continue his athletic career.

“It was special to represent Shenandoah here and a a nice way to end my high school career,” he said. “I’m looking forward to it (going to Findlay) and I’m hoping I can get to seven feet some day.”

Payton expects to compete in both the high jump and long jump (he set the SHS record in that event at 22-0.75 earlier this year) for the Oilers.

McVicker’s first appearance of the day came in the 110-meter hurdles where he was an at-large qualifier after finishing fifth in the regional at Massillon Perry but had the best time after the four qualifiers from each region.

In Friday’s semifinals, he posted a time of 15.56 (seventh best) and went on to an eighth place finish in 16.06 seconds.

The 6-4 McVicker was just getting started, however, as his best was yet to come.

Less than an hour and a half later, his best event – the 300-meter hurdles arrived and after posting the best qualifying time from the four regionals (39.98), he reached the finals Friday with a semifinal clocking of 40.29 (second best).

In the finals, McVicker was nearly flawless, but Coldwater junior Tyler Schwieterman (ironically a possible distant relative of legendary Shenandoah basketball coach Dan Schwieterman who was in fact born in Coldwater!) blazed to victory in 39.48 seconds while McVicker finished second in 40.09.

Like Payton, McVicker was excited to end his career on such a high note.

“I had a great career and a senior season to remember for the rest of my life,” he said. “I felt I ran my absolute best, but he (Schwieterman) came out of nowhere to win it.”

Joining Payton as a runner-up on the Podium wearing the green of the Zeps was certainly not lost on McVicker.

–Noble Local Superintendent Dan Leffingwell, as part of his duties with the OHSAA Board of Directors, was fortunate to be the one placing the medals around the necks of the dynamic duo on the podium.

–A nice-sized contingent from Zep Nation was on hand to support Max and “Shak”.

–The two-day event at Westerville North drew in excess of 9,200 paid spectators – the largest attendance of the three sites for the state competition.

–Shenandoah finished with 17 points, which was good for 13th place, the highest finish among teams from the Eastern District. Tuscarawas Valley scored eight points as Tyler Stump was fourth in the high jump (6-4) and fourth in the 200-meter dash (22.80); Shadyside’s Andrew Osman finished seventh in the pole vault (13-6) and Steubenville Catholic’s Joe Rohde was eighth in the 400-meter dash (51.76).

–The D-III state champion was Minster with 41 points, with McDonald as the runner-up with 39.