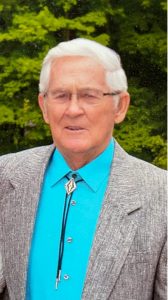 Billy Dale Pryor, a loving father, caring pap, and friend to many, died on June 28, 2021, with his family by his side at Presbyterian Senior Care in Washington, PA.; he was 85 years old.

Billy was born on September 21, 1935, in South Olive, Ohio, the eldest of three and the only son to William R. and Margaret Amanda Brothers Pryor.

In 1954, Billy married the love of his life, Patricia Madeliene Haas.  He was introduced to her at the Marietta Fair on a double-blind date with his friend, but the irony of the evening was, Patricia was not Billy’s date.

For more than sixty years, Billy was a self-employed general contractor.  He found much enjoyment engaged with his bulldozers or backhoes. His son Christopher said, “He enjoyed pushing dirt.”  Most recently, his company was responsible for many of the buildings that had been constructed on American Way.

Billy was a proud member of the Weirton Masonic Lodge #171.

Billy’s family described him as quite the storyteller.  Growing up on their 70-acre farm in South Olive, the family remembers the farm animal stories and their neighbors helping each other whenever needed. The chores on his farm went without saying; they needed to be done daily.  Billy knew from an early age that he had to think of something to get out of doing his fair share.  He joined the basketball team to be late coming home and make it more to his advantage, and he would ride his horse, so it took him longer to get home.  Sometimes he would let his horse go home without him, so he would be forced to walk the 8-10 miles to get out of his obligations on the farm altogether.

His courting of Patty had unique aspects; he was an ingenious man. For example, while driving across a particular cement bridge close to the Haas’ home, he would intentionally make his car backfire, so she knew he was on his way. In addition, Mrs. Haas would not allow her daughter to ride in a car with no heat; therefore, he would light a kerosene lantern inside his car to appear to have a heater. Upon arrival at her house, Billy would turn off the heater and hide it to ensure his future mother-in-law that his car was warm enough for her daughter.

In addition to his parents, Billy was preceded in death by his grandson Cole Christopher Pryor who passed on February 26, 2010.

Billy will be laid to rest next to his wife at Dudley Cemetery, Olive Township, OH.

Share tributes and memories with his family at www.grecohertnick.com.