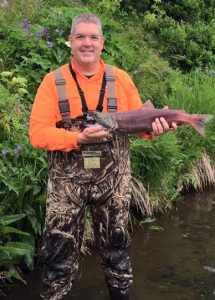 Pastor Larry Allen Copley, age 50, of Caldwell, Ohio, entered the eternity which he proclaimed for so long on Saturday, July 17, 2021, at Genesis Hospital in Zanesville. He was born September 29, 1970, in Cambridge, son of Debbie (Jeff) Neilson Leonard of Cambridge. Larry was a 1988 graduate of Cambridge High School and Mid-East Career Center, where he studied auto mechanics. He was a United States Navy veteran, having been stationed at Kings Bay Naval Base in Georgia, where he worked on submarine tenders. He graduated from Luther Rice Seminary in Stonecrest, Georgia, and served the Glynn Haven Baptist Church and O’Quinn Baptist Church in Georgia before accepting the pastorate at Faith Baptist Church in Belle Valley, Ohio. He was a member of the Belle Valley American Legion Post #641. Larry enjoyed cooking, hiking, traveling, and watching NASCAR and drag racing. He was an avid fan and supporter of Shenandoah and Caldwell High School sports, and he taught the Community Theology Program at Caldwell High School. He also loved being a Georgetown Tiger. Larry was dedicated to his family, and he showed this through the light of God which was seen in his relationships as a loving husband and father. He was committed to helping people in the community who were in need; his life’s mission was to equip people to serve their community for Christ. Larry will be missed by many, but his ministry will continue to spread through the lives that were touched by his 27 years of ministry. Larry truly loved his church and his church family.

He is preceded in death by his father, Ron Burley; and his grandparents, Beverly and Jim Neilson.

Surviving are his wife, the love of his life, Laurie Nicole Kennedy Copley, whom he married August 31, 1991; his children, Beverly Nicole (Jamie) Smith of Caldwell and Joshua Allen (Carrie Bell) Copley of Georgetown, Kentucky; his granddaughter, Mackenzie Austen Copley, who is soon to be born; his brother, Jimmy (Jonelle) Burley of Cambridge; his uncle, Mike (Lisa) Neilson of Cambridge; his father and mother-in-law, Ronald and Kathy Kennedy, brother-in-law, Ronnie (Kristen) Kennedy, and nephew Kane Rozier, all of Screven, Georgia; several cousins; and many dear friends.

Friends may call Thursday, July 22, 2021, from 2-8 p.m. at Faith Baptist Church, 200 Grove Road, Belle Valley. The funeral service will be observed Saturday, July 24 at 11 a.m. with Stephen Michael Hannum, Joshua Allen Copley, and Paul Chapman officiating. A veteran’s service will be conducted by the Noble County Veteran Service Organizations. Memorial contributions may be made to Faith Baptist Church for the purchase of new chairs and carpet for the church sanctuary. McVay-Perkins Funeral Home, 416 East Street, Caldwell, is caring for the family. An online guestbook may be signed at www.mcvay-perkins.com