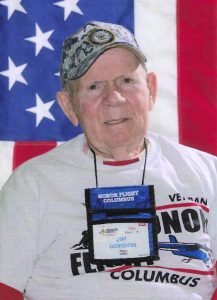 James Steward Gordon, age 94, of Cumberland, Ohio, joined the Lord Wednesday, August 11, 2021, at his country home with his wife, Jean, by his side. He was born January 15, 1927, in Noble County, son of the late Jesse James and Myrtle Clara King Gordon. Jim attended Caldwell schools and was a United States Navy veteran, having served during World War II on the aircraft carrier USS Salamaua in the South Pacific. He retired in 1989 from the Mould Company in Zanesville and moved to a 40-acre farm in Claysville, where he raised cattle, horses, and performed farm work. Jim was a member of Amity Lodge #5, F&AM in Zanesville, the Valley of Cambridge, AASR, 32nd degree Mason, the Amrou Grotto Shrine in South Zanesville, and the American Legion Post #29 and the Fraternal Order of Eagles, #302, both in Zanesville. He attended the Cumberland United Methodist Church. In April of 2018, Jim attended the Honor Flight for veterans to Washington, D.C. He was an outstanding carpenter who built and remodeled many houses.

In addition to his parents, he is preceded in death by one son, Philip Shawn Gordon, who died May 18, 1992; two sisters, Cleo Hutchins and Mary Moore Leonard; and four brothers, Wiley Walter, Herman, Richard, and Willard “Buck” Gordon.

Surviving are his wife, Jean Lorey Gordon, whom he married June 6, 1954, at Ragan’s Chapel by Rev. William Foster; a sister, Helen Bates of Zanesville; a brother, Lloyd C. Gordon of Indiana; and many nieces and nephews, including a special niece, Darlene Boyer; and dear friends and neighbors.

Friends may call Friday, August 13, 2021, from 5-8 p.m. at McVay-Perkins Funeral Home, 416 East Street, Caldwell, where the funeral service will be observed Saturday, August 14 at 11 a.m. with Pastors Keith Taylor and Frank Miller officiating. A veteran’s graveside service will follow at Hoskinsville Cemetery conducted by the Noble County Veteran Service Organizations. An online guestbook may be signed at www.mcvay-perkins.com