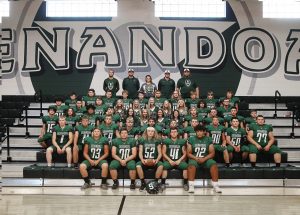 It’s just about time to “Flip the Switch” for the Shenandoah High football team.

The Zeps begin a new era on the gridiron under the guidance of Johnny Jones this week and the first-year coach has stressed that idea in preparation for the 2021 season.

“The idea of ‘flip the switch’ has been something we’ve emphasized in many respects,” said Jones, a graduate of Cambridge High School and Gannon University who has coaching experience as an assistant at both Cambridge and Buckeye Trail. “When we step onto the field for practices or games or into the weight room, it’s time to go 100 percent and get your work done.

“We don’t want to see them pacing themselves…just do it until you can’t do it anymore and we’ll get somebody else in there for you,” he continued. “A play is usually only three to five seconds, so get after it full go and then relax until the next play and get after it again.”

Jones takes the reins after a six-year stint by SHS product Jesse Wells, who compiled a 33-27 record with three trips to the OHSAA playoffs. The Zeps return a nice-sized, veteran group of interior linemen, but the ‘skill’ position players are young and inexperienced for the most part.

The new SHS boss says the players have bought in to the new program nicely, but that it’s been a bit of a whirlwind getting ready for the opener.

“Everything has been happening so fast, I haven’t really had time to sit back and think about it,” he said of making his head coaching debut with a rare Thursday night opener at Newcomerstown.

“The kids have adapted to the changes well,” Jones offered. “Some things are similar to what they’ve done, but there are some new things, too. Jesse has given these kids a solid foundation and I’m just trying to keep things moving forward.”

Shenandoah finished last year’s COVID-tested season with a 4-4 record, competing in the revamped OHSAA Division VI, Region 23 playoffs where they received a bye as the No. 7 seed before falling to Coal Grove Dawson-Bryant, 41-38, in the second round.

“We graduated 14 or 15 seniors and we only have five seniors this year,” said Jones, who enters the season with a 39-player roster. “That (only five seniors) has required some of  our other kids to step into the leadership roles, but we’ve got a lot of resilient kids who want to put themselves on the front lines and are willing to learn from their mistakes.

“The guys really put in the time over the summer and bought in to the program,” he continued. “Our goal was to put an hour and a half workout into 50 minutes and I think that’s not only made us stronger, but quicker as well.”

With so many youngsters in key spots, Coach Jones knows there will be bumps along the way.

“We’re don’t have a single senior in a ‘skill’ position, and for a lot of them it will be their first time playing at the varsity level,” he said. “We throwing some young kids into the fire and we know we’ll make some mistakes, but we’ll get it all figured out.

“We need to stay healthy and have solid time management,” the SHS coach added.

“We’ll rely heavily on our senior offensive linemen,” acknowledged Jones. “It’s no secret we’ve got some big boys – we average around 240 across the line – so we’ll try to establish the run with a one tight end, two-back set an build off of that with play-action but we can go with multiple wideouts if we need to.

“Defensively, we’ll use a base 4-3, but that doesn’t mean we won’t switch to a five-man front if needed,” he said. “I think we can execute that (the 4-3) even with a lot of young guys in the secondary.”

As previously mentioned, the majority of experience offensively is with the interior linemen.

Mackie, a three-year letterman, earned second team all-Ohio Division VI at defensive tackle and he was also a first team all-Eastern District and all-OVAC Class 2A selection. The SHS Lineman of the Year, he was credited with 31 “pancake” blocks last fall and even got into the scoring act by running for a pair of two-point conversions in the Zeps’ goal line package.

Hannahs and House are both two-year lettermen.

“Nathan didn’t get much varsity experience last year, but you’d never know that with how he approaches the game,” said Coach Jones. “He’s so eager to learn and we’re looking for a good season from him.”

At the running back spots, the Zeps will have junior two-year letterman Tyce DeVolld (6-1, 185) and sophomore letterman Sam Townsend (6-0, 165). DeVolld suffered a season-ending injury last fall around mid-season and Townsend earned the Zeps’ “Rising Star Award” after his freshman campaign. Both will also see action at receiver to take advantage of their speed on the outside.

Defensively, the aforementioned Schott and Mackie are the top returnees at middle linebacker and defensive tackle, respectively. Schott collected 91 total tackles (46 solo) including four tackles for loss, one QB sack, two forced fumbles and one fumble recovery while Mackie was credited with 64 stops (25 solo), 10 tackles for loss, three sacks, five forced fumbles and one recovery.

Joining Mackie at defensive tackle in the Zeps’ 4-3 alignment will be Hannahs, Anderson and Weisend backed by Joey Crum while Rataiczak and House will be at the ends, with Scott also in the mix.

Flanking “Mike” linebacker Schott are DeVolld as the “Sam” and Trenner as the “Will.” Feldner, Rich and Joey Crum will also get “PT” as ‘backers and Van Fleet, if needed, can play there.

The cornerbacks are Palmer and Ethan Carpenter, with Portman also a regular; and the safeties are Yates and Townsend. Freeman and Rossiter provide additional secondary support.

The placekicker will be Jacob Crum (currently recovering from a broken arm) while Schott and Ethan Carpenter are the punters.

A large freshman class of 15 will bide their time before stepping into prominent roles in the future.

The large group of players lost is headed by Cade Denius, a two-time first team all-Ohio Division VI selection who also earned first team all-Eastern District (Co-Defensive Player of the Year) and all-OVAC Class 2A. He was selected for the OHSFCA North-South All-Star Game which was not played due to COVID-19.

After playing the season opener at Newcomerstown, the first home game comes  in Week 2 against Shadyside; Week 3 features Racine Southern and the induction of the Charter Class of the Shenandoah Athletic Hall of Fame; Week 6 is the Homecoming Game against Buckeye Local; and arch-rival Caldwell is back in the Week 10 slot, with this year’s game at the Noble County Fairgrounds.

The Zeps will be joining the Mid-Ohio Valley League and will be in the same division with Shadyside, Monroe Central, Barnesville, River and Buckeye Local, with full participation starting with the 2022 season.