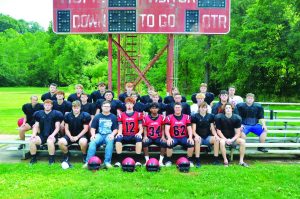 The Caldwell High football team will be young this year, having lost 11 players to graduation, but the Redskins are looking to improve on last season’s record.

Head Football Coach Chance Rucker is excited to return to his alma mater this fall.

“I am extremely excited for this season.” said Rucker, a 2016 CHS graduate. “I am so thankful to have this opportunity with Caldwell Schools and that they stuck their neck out and took a chance on Chance.

“We have a good bunch of young kids,” he continued. “I think we can win with these kids. They are super. They listen and pay attention to detail. We are ready to rock.”

Rucker wants to reestablish the tradition of Redskin football despite having a lot of youngsters on hand.

“Our goal this year is to win some games,” he said. “We need to get our kids used to winning…get the tradition brought back to the Caldwell lifestyle of five or six years ago. It is a mentality that these kids have to learn at a young age.

“This group reminds me of the 2013 season,” he continued. “We had a bunch of young guys playing and we carried that intensity on for the rest of our careers. We see that same fire in this group. We have a lot of hope and promise with these guys.”

“We will be repping in some new formations, but we will stick to what has worked in the past,” he said. “Personnel-wise, we have the ability to be in a ‘spread’ and jump right back into the wing-T with the versatility we have with our personnel.

Rucker is looking to several returners to lead the team this fall.

Junior Braxton Dudley (5-10, 165) will be running the offense again this season. He was honorable mention All-Ohio D-VII, first team All-East District and first team All-OVAC Class 2A as a sophomore. He led the Redskin offense in 2020 with more than 700 yards in both passing and rushing.

“Braxton is an electric player,” said Rucker. “He can make the big plays with both his arm and his feet. We need to keep him healthy this year, although Cale has been getting some first team reps in practice. He has been stepping up and showed us good promise in our first scrimmage.”

Junior Marshal Sayre (5-9, 185) returns to the backfield. He rushed for close to 400 yards last season and was named special mention All-Eastern District D-VII and honorable mention All-OVAC Class 2A. Freshman Jeffery Guiler (5-9, 195) will back up Sayre in the backfield.

“Marshal is a rock…he’s the terminator,” offered Rucker. “He can take hits and give them, too. We look to have him carry the ball 20 to 25 times a game.”

Dudley will have several targets to throw to this season.

Senior Waylon Clark (5-10, 225), who was special mention All-Eastern District D-VII last season, will be the leader of the offensive line at left tackle.

“Waylon is our most experience lineman with three letters and 27 career starts. He is the ‘father’ for our line.” Rucker commented. “The line might be a little small, but they are fast and athletic.”

Paisley Sidwell (5-6) will handle the field goal kicking duties this season. She will be the first female football player in Caldwell history. She is also a defender on the Redskins soccer team. Kowalsky, a former soccer player, will be the punter and Peachey will handle the kickoff duties.

Defensively, the Redskins will use what has worked in the past.

“We will stick to the same stuff, the bread and butter that we have used for countless years,” said Coach Rucker. “We will run a 4-4 base. Our defense will be our strong suit this year.”

The defensive line will be on the small side, but they are quick and athletic. The line will include Clark, Kowalsky, Carpenter and Norman with Freeman, Depuy, Williams, Brown, Rieter and Bentley as backups.

Langley and Sayre will both be starting at linebacker. Other linebackers include Wheeler, Peachey, Crock, Guiler and Moni.

“Our linebackers are really good. They can fly around, make plays, and force everything to the inside.” Stated Rucker.

The secondary will look to Dudley, Bender, and Herlan to start. Other defensive backs include Mckee, Parks and the VanFossen twins.

Whyatt Parks, who played receiver and defensive back, was named honorable mention All-Ohio D-VII and first team All-Eastern District D-VII. He will continue his playing career at Ohio Northern University.

Rucker has surrounded himself with a seasoned coaching staff. Jason Rucker will be the offensive coordinator and Jerry Hamilton and Shane Rucker will oversee the defense. Other coaches include James Noyes (special teams), Jensen Croucher (quarterbacks), Bryan Sawyer (offensive and defensive line) and Mike DeVol, who returns to mentor his former player. Denny Riddle and Austin Griffin will handle the junior high coaching duties.

The Redskins looks to improve on last year’s 6-3 record. They qualified for the OHSAA Division VII, Region 27 playoffs. They were the sixth seed and, after a first round bye, lost to Reedsville Eastern, 26-14, in the second round. They finished in third place in the OVAC Class 2A.

The Redskins will face many familiar teams this season, including perennial foes Monroe Central, Fort Frye, Buckeye Trail and Shenandoah. New to the Caldwell schedule this season are Buckeye Local and Strasburg.

The Redskins kick off their season on Friday hosting Buckeye Trail at the Noble County Fairgrounds.