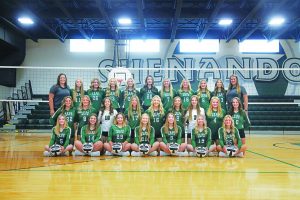 Talk about a good problem to have!

Thanks to the experience gained over the last couple of seasons, the Shenandoah Lady Zeps are primed for a strong season with a squad that could see the entire varsity squad playing significant roles.

Coach Megan Grywalski welcomes back nine letterwinners from last year’s team which posted an overall 14-13 record. That includes winning the OHSAA Division IV Sectional crown (beating Frontier and Monroe Central) and reaching the D-IV District (falling to Tuscarawas Central Catholic in the semifinals) and taking the runner-up spot in the OVAC Class 2A Tournament, beating Wheeling Central in the semifinals before falling to Shadyside in the championship match.

The good news is that the Zeps had zero players graduate and with so much talent returning, more specialization to take advantage of each player’s strength will be possible.

“As players gain experience, they are also gaining a better skill set of course,” said Grywalski, who was named District 12, Division IV Co-Coach of the Year last season. “This gives us many options this year for varsity because having many players with strong capabilities will let us specialize with the players more. Most of our players will either play only back row or only front row.

“We have the capability to have three strong attackers in the front row at all times which will really help us against strong teams during tournament time,” she added.

Developing team chemistry with so many girls expected to see action and developing mental toughness are points of emphasis, according to Grywalski.

“Some challenges come along with a bigger roster,” the Lady Zeps’ coach related. “Overall, we need to iron out that team chemistry.

“I intend for our team to show improvements in mental aspects as well,” Grywalski said. “We didn’t have the advantage of varsity-experienced players last year, so I’m looking to see improvements in their mental toughness.”

The lone freshman on the varsity squad is Klara Anderson (middle hitter).

The Lady Zeps open the season Saturday at Buckeye Trail and make their home debut next Monday (Aug. 23) against Cambridge.