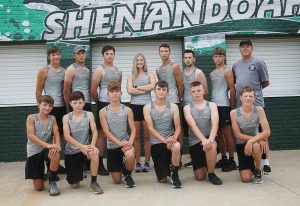 It’s a mixed bag of participation on the Shenandoah High cross country team this fall, with good numbers and increased expectations on the boys’ side while there is just one girl running this fall.

Head coach Craig Sebring enters the third season of his second stint as the Zeps’ boss (his fifth overall) with 13 boys on the squad, including a half-dozen returning lettermen.

“I don’t want to put too high expectations on this team,” said Sebring, “but I think we will be very competitive in all our meets this year. Our main goal is to win the OVAC 1A/2A division and get as many athletes to the regional at the end of the season as possible.

“We want to continue to gain experience for the underclassmen; be competitive each time out as a team and continue to promote and build the program,” he added.

The lone junior on the squad is two-year letterman Austin Perkins.

Two lettermen are among the three sophomores – Cale Bond and Christian Dimmerling.

“Each of these six athletes have experience competing at the high school level of competition. Every one of them scored in the top five on our team at some point last year.”

The third soph is Weston Miley, who has shown excellent work ethic and could be a key member of this year’s team.

“We also have six freshmen competing this year, with three who competed in junior high and three first-time runners,” said Sebring.

“Denali has been running for three years and has improved every year,” said Sebring. “We expect her to continue to lower her times and improve her place finishes each race.”

While concerned with the lack of participation of girls, Coach Sebring takes the “it is what it is” approach.

“Many of those who are running are getting in shape for a winter sport,” he said, “while others compete because of the love of the sport and the friendships they make throughout the season.

“Many of the female athletes in our school already are playing a fall sport (volleyball) while others just don’t have the desire to compete.”

Graduation claimed four runners – Kendall Mackie and Hope Saling on the girls’ side and Aidan Snyder and Caden Chicwak on the boys’ side. Mackie earned all-Eastern District and all-OVAC honors and was an OHSAA Division III Regional qualifier. Snyder earned four varsity letters while the others were three-year monogram winners.

The Zeps’ first action comes Saturday, Aug. 28 in the Elizabeth Broughton Invitational at Marietta. SHS will compete in invitationals at Fort Frye, Belpre and Cambridge as well as the OVAC Cal Pokas Cross Country Championships.