Fentanyl, along with isolation and stress from Covid-19 pandemic, propelled surge, experts say.

From The Wall Street Journal 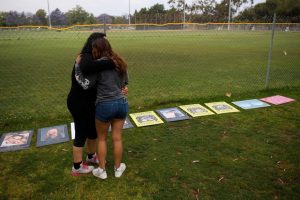 Signs made by family and friends of people who died after being poisoned by pills containing fentanyl in Santa Monica, Calif., in June. PHOTO: PATRICK T. FALLON/AGENCE FRANCE-PRESSE/GETTY IMAGES

Drug-overdose deaths in the U.S. surged nearly 30% in 2020, the result of a deadlier supply and the destabilizing effects of the Covid-19 pandemic, according to preliminary federal data and public health officials.

The estimated 93,331 deaths from drug overdoses last year, a record high, represent the sharpest annual increase in at least three decades, and compare with an estimated toll of 72,151 deaths in 2019, according to provisional overdose-drug data released Wednesday by the Centers for Disease Control and Prevention.

“That is a stunning number even for those of us who have tracked this issue,” said Brendan Saloner, associate professor of health policy and management at the Johns Hopkins Bloomberg School of Public Health. “Our public health tools have not kept pace with the urgency of the crisis.”

The surge, the 2020 data show, was driven largely by a proliferation of fentanyl, a powerful synthetic opioid whose use has spread across the nation. The pandemic amplified the epidemic of overdoses, bringing on social isolation, trauma and job losses, according to addiction experts and treatment providers. Overdose deaths began rising in the fall of 2019 with the spread of fentanyl, but really took off starting in March 2020, when pandemic-driven shutdowns and physical-distancing measures set in. “It’s really one of those things where 2020 turbocharged something that was already wildly out of control,” Dr. Saloner said.

Fentanyl, which is 50 times more potent than heroin, is now frequently mixed into other widely used illicit drugs, often when the user is unaware. “Fentanyl is poisoning our drug supply,” said Monique Tula, executive director of the National Harm Reduction Coalition, an organization that advocates for people who use drugs and trains the harm reduction workforce.

An estimated 57,550 people died of overdoses from synthetic opioids, primarily fentanyl, an increase of more than 54% over 2019, according to Robert Anderson, chief of the mortality statistics branch at the CDC’s National Center for Health Statistics. “Definitely fentanyl is the driving factor,” he said. Overdose deaths from opioids overall rose nearly 37%, according to the CDC data.

Deaths from overdoses of methamphetamine and cocaine also rose, the CDC said.

“I can remember thinking 30,000 was an astounding number,” said Dr. Anderson. “Now we’re three times that. It’s crazy.” Final overdose death data will likely be released in December, he said.

The deaths from drug overdoses form a twin public health crisis with Covid-19 and show how the human toll of the pandemic extends well beyond the estimated 377,883 U.S. deaths involving that disease last year. Covid-19 was the third-leading cause of death in the U.S. in 2020, after heart disease and cancer, according to preliminary mortality data. Unintentional injuries, which include drug overdoses, were the fourth-leading cause. 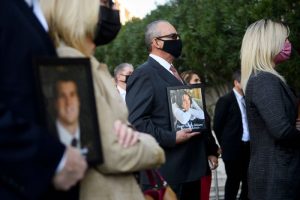 Jaime Puerta, center, held a portrait of his son, Daniel Puerta-Johnson, who died last year at the age of 16 from a pill containing fentanyl, during a news conference in Los Angeles in February. PHOTO: PATRICK T. FALLON/AGENCE FRANCE-PRESSE/GETTY IMAGESOverdose deaths are helping to drive down U.S. life expectancy, which may have suffered the largest drop last year since 1943, during World War II.

The CDC is expected to report preliminary 2020 life-expectancy data next week.

Many people who were receiving treatment for drug addictions or wanted it were unable to get it in the early weeks or months of the pandemic, or faced disruptions or changes in service, treatment providers say. Job losses or deaths of family and friends created stress and trauma, while office and business closures reduced social interaction, depriving some of coping mechanisms they rely on. Some people ended up homeless, on the street, where they have had trouble accessing treatment, Ms. Tula said.

“It’s about isolation, about disruption in life, and maybe exacerbation of mental-health symptoms,” said Adam Maslowski, clinical coordinator for outpatient services for treatment provider Phoenix House in Long Island City in Queens, N.Y., who shifted to telehealth services early in the pandemic but also kept a walk-in clinic open.

“A lot of people love Zoom, but there is something about face to face contact,” he said. The provider has offered both in-person and virtual care since last summer.

While white people account for most drug-overdose deaths, they have risen in recent years among Black people.

In Minnesota, the drug-overdose death rate for Black people was nearly twice that of white people in 2019, according to a report from the Minnesota Department of Health. Mary DeLaquil, author of the report and an epidemiologist with the department, said that while those data aren’t available yet for 2020, she doesn’t expect an improvement. “I feel fairly confident saying it’s not going to go down in 2020,” she said. “In Minnesota and nationally, we are seeing drug overdoses rise across the board.” 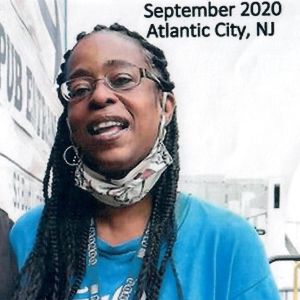 Tiffany Sales had been on and off drugs for her entire adult life when she went into a casino bathroom early one morning in the first week of January this year in Atlantic City, N.J., her hometown. The 52-year-old former concessions operator was found dead later, a crack pipe in her hand, said her sister, Lisa C. Oliver.

Ms. Sales had weaned herself off drugs several times, and held down supervisory-level jobs when she was clean, said Dr. Oliver, an instructional designer for a healthcare system and a grief counselor who lives in Atlanta. Normally in only sporadic touch with family members, Ms. Sales had reached out early in the pandemic. “She left a voice mail saying, with all that’s going on, I want to keep in touch,” Dr. Oliver recalled.

The rising death toll points to a need for urgent, comprehensive measures to address the crisis, public health and treatment experts said.

State and local governments are seeking more than $26 billion from opioid manufacturers and distributors in lawsuits that seek to recover the costs of fighting the epidemic.

In general, the governments allege that the pharmaceutical industry pushed opioids to be prescribed and distributed beyond what was medically necessary, creating widespread addiction that led to higher abuse of street opioid drugs such as heroin and illicit fentanyl. The companies say they sold or distributed a legal product that was prescribed by doctors necessary for pain management.

After years of delay, three trials are under way in New York, California and West Virginia.

Some cases have settled recently. Johnson & Johnson agreed in June to pay $230 million to the state of New York to resolve an opioid lawsuit.

New York, Massachusetts and 13 other states signed on to a settlement this month with OxyContin maker Purdue Pharma LP and its owners, the Sackler family.

The governments should use the settlement money they are expected to receive for treatment and prevention programs, including investments to help reduce disparities in communities of color, Ms. Tula said.

The priority now should be to get help to people at high risk of overdoses, Dr. Saloner said. Then, more steps should be taken to make treatment easier for people in need to access, he said. They include making treatment available in pharmacies and community clinics, and removing limits on the number of patients providers can prescribe medication for opioid-use disorder.

Write to Betsy McKay at betsy.mckay+1@wsj.com